Professor Liz Kelly, Director of the Child and Woman Abuse Studies Unit, comments on the International Day for the Elimination of Violence Against Women.

The first activism on this day was in South America in 1981, commemorating the assassination in 1960 of the three Mirabal sisters who were activists resisting the dictatorship in the Dominican Republic.  It was given wider recognition when the USA Center for Women’s Global Leadership proposed 16 days of action in 1991, ending on Human Rights Day, 10 December.  The 16 days were seen as a space in which awareness raising and protests would highlight the scale of violence against women and girls (VAWG).

November Women’s Action was formed in the early 1990s and organised four marches and rallies in both London and Manchester, on 25 November.  The group met in Ladbroke House when we were known as the Polytechnic of North London.  The terrible weather on the last event led to the group hosting different activities and it ceased meeting in the late 1990s.  The march/protest has been replaced by Million Women Rise on the Saturday nearest to 8 March, founded by London Met alumni Sabrina Quereshi.  We have a proud tradition in our University of being part of resisting men’s violence to women and girls and of celebrating the organisations which address it.

The UN recognised 25 November as International Day for the Elimination of Violence Against Women and the 16 days in 1999, helping to spread recognition and take up.  There has been a tension with White Ribbon (a solidarity organisation in which men work to end VAWG) in some countries, especially Australia, renaming the day White Ribbon Day – and I can be found on Twitter contesting this in recent years.

One of the most spectacular markings of the day took place in Italy in 2019 when over 150 thousand marched for the third Non Una Di Meno (not one woman more) demonstration.  Many events will take place across London – look on your local authority website to find out what is happening globally.

Million Women Rise is organising a vigil this 25 November outside New Scotland Yard from 1pm to 3pm, to protest the failure of the criminal justice to protect women and appropriately investigate cases. 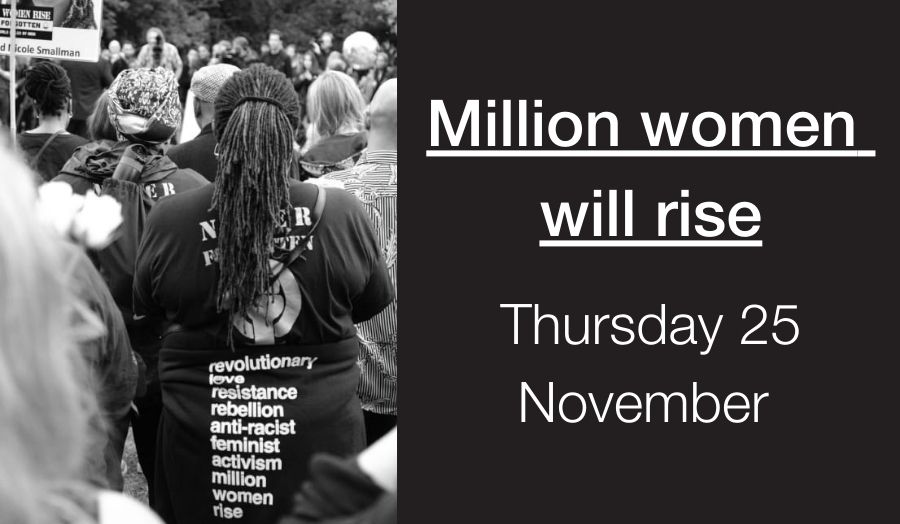