Sylvia Henry, recent Film and Broadcast Production BA graduate, reflects on the importance of Black representation in film and recalls the ways Blackness has been exploited in film.

Since film first began, Black people have been put in a box. From the first representations of Black people in film to some of the most recent ones, Black people are placed in films as a token. Whether it is to show people how brutal and mean Black people can be or to show the injustice that they go through on a daily basis. Black-led stories can’t just tell a story, they must always have some deeper meaning behind them relating to the colour of the characters’ skin.

Before we can discuss the impact of modern-day film, we need to understand the historical context. Media and politics are very closely connected, and the injustice described all happened very recently.

The end of the American Civil War in 1865 was supposed to mark the end of slavery. The government slowly gave African Americans rights (such as eligible male citizens being allowed to vote after 1870), but most of the country kept the mentality of ‘separate but equal’. This meant that the country continues to be segregated but, due to things like the ‘Jim Crow Law’ African Americans were considered second class citizens.

In 1909 the NAACP (National Association for the Advancement of Coloured People) was formed. This was a group of people who came together to battle the segregation of coloured people. They also, famously, protested against the film The Birth of a Nation (1915) which is notoriously known as one of the most racist films due to its stereotypes of Black people, the depiction of blackface and Ku Klux Klan sympathy. In 1951, the NAACP was working to stop segregation in school as many believed that it was having a negative effect on African American children. The infamous Brown vs. The Board case came about and in 1955, they won. President John F. Kennedy proposed the Civil Rights Bill in 1963, and it was then approved in 1964. The Civil Rights Act outlawed racial discrimination in employment. This allowed more Black people to be in the film and TV industry.

One of the first representations of Black people in film was in 1903 in a 12-minute film called Uncle Tom’s Cabin. A simple, short, silent film began an interesting journey for Black people in the media, but it was a sour start. For the man who played the first infamous Uncle Tom character wasn’t actually a Black man at all — he wasn’t even a person of colour — but actually a nameless white actor in blackface.

This was the beginning of five famous African American stereotypes that featured heavily in films from here on out.

The next character is the Coon, which is actually made up of many different types of character and personalities but is linked by the overarching ideology that they do not want to do any work. Some types of the Coon character are the Pickaninnies, who are normally children with wide-eyed joy, or the Rastus, who is known to be really unreliable.

Then there is the (Tragic) Mulatto, a woman who is sadly born with the unfortunate reality of being half Black. Normally this character was there to portray the unfortunate life one would have if they were mixed.

The last one is the Buck. First featured in the film The Birth of a Nation (1915), the Buck's characteristics are brutal, hypermasculine and a threat to white people and all they stand for.

The word “stereotype” carries a lot of negative connotations. Stereotyping someone or something is one of the first things everyone does when we encounter something new. A lot of the stereotypes we already know help us understand others, even if it is at a basic level. For example, British people, stereotypically, love tea and the Royal Family and are posh. Women, stereotypically, tend to be bad drivers. Black people, stereotypically, tend to be loud, love chicken and watermelon. Now, these are all stereotypes that I have heard or seen growing up either on TV, movies or from talking to people. Not all of these stereotypes are particularly bad on paper, but they don’t allow for correct representation for the complex subjects they are describing. Stereotypes tend to be very simple but the subjects they are talking about are not. I am a British Black woman, so I can say with confidence that not only do some of these statements not apply to me (I dislike tea, I don’t mind the Royal Family, I’m not posh, I can’t drive, I can be loud, I do love chicken but I dislike watermelon) but there is a lot more to me than this stereotypical version of a British Black woman can represent.

When it came to films’ representation of Black people and Black lives in the 1800s and early 1900s, all they really had was stereotypes. While the lead characters were going on adventures and changing as characters, those left as secondary characters didn’t have time to change so were left as one-dimensional characters. Due to these characters not needing to grow, they remained simple and the best way to portray a character simply is by stereotypes. This means the audience will understand exactly what type of person this character is just by the way they dress, how they speak and what they do.

The only representations of Black people that weren’t negative were those created by Black people themselves which only started coming to cinema in the 1970s. In this era, “Blaxploitation” media became the height of Black-created representation. This still followed along with the tropes of Black people as hypersexual and violent, but added the twists of being cool, strong and was always willing to stand up for what is right. These men were also leaders in their own stories. Melvin Van Peebles released his independent film Sweet Sweetback’s Baadasssss Song (1971) and the people loved it. The Black community found their role model in Sweet Sweetback, a man wrongly convicted of a crime, who has no choice but to fight against "the man". Hollywood took note of this success; not only noting how much money the film made but how low budget it was. They decided to copy the formula of the film with the 1971’s Shaft.

These new strong Black lead films were dubbed "Blaxploitation films" by the media. However, many people in the Black community loved the films. Comedian Eddie Murphy explained in an interview, “at the time we didn’t feel exploited”. We tend to feel a sense of pride when we see ourselves represented. This could be explained by Maslow’s Hierarchy of Needs. Humans tend to gravitate to people with similar interests and appearance because we like to feel like we belong. This could also explain our need to see others like ourselves represented as it gives the same feeling of belonging. These films mirrored the injustice and anger that a lot of people in the Black community felt at the time and I believe that these films might have given some people the courage needed to fight for what they believe in. Seeing someone like themselves fighting against people they want to fight against (in these films this is often the police) might have given them the courage to do the same.

Image: “Starring: The Black Community” was a line in the opening credits to Sweet Sweetback’s Baddass Song. During the Civil Rights Movement of 1968, protestors used the signs “I AM A MAN”, in reference to: “Am I not a Man and a Brother?”, the catchphrase for the British and American abolitionist movements. 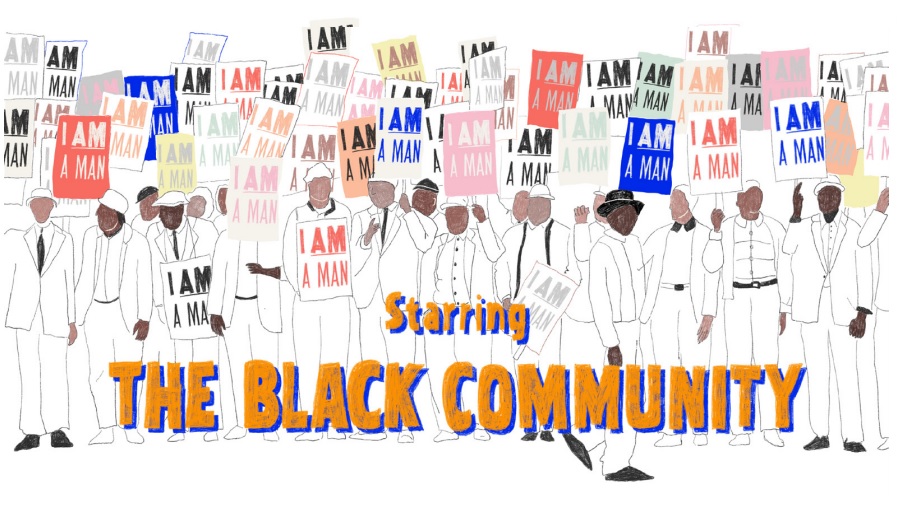 This essay features in Conversations on Racism, a recent publication by the Metropolitan Architecture Student Society (MASS). Print copies are available to buy on their website or available freely as a PDF.