On Friday 23 November, I was very lucky to witness the achievement of a new world record which occurred in the British Airways engineering east operations base at Heathrow. What’s the record you may ask?

The airport’s ‘Wheels4Wings’ event saw a team of 100 people in wheelchairs pull a 127.6 tonne 787-9 Boeing Dreamliner over 100 metres, beating the previous record of 67 tonnes held by a Belgian team. Luckily the weather held up long enough for the participants to remain dry during the attempt. Money raised from this event will go towards registered charity Aerobility’s programmes, helping people with disabilities participate in aviation.

At the event was a plethora of participants from a wide variety of backgrounds these included security officers, volunteers and operational staff from across Heathrow. The MC for the day was the hilarious comedian and impressionist Jon Culshaw who got the troops in the right mindset for the upcoming attempt. He performed using the voices of celebrities such as Simon Cowell and even Michael Buffer’s famous catchphrase “Let’s get ready to rumble.”

My company, Mementoo Photomagnets, provided the participants with a memento to cherish from the event. Our photographer took pictures which the team transferred onto magnets that can be stuck on your fridge, car etc.

The event was also a celebration for Heathrow implementing a new process for airlines whereby wheelchair users will have their own wheelchairs waiting for them upon descending the aircraft. This year Heathrow has spent £23 million to create a better infrastructure for people with disabilities. Changes have included new equipment, resources, and technology as well as a distinctive lanyard for people with hidden disabilities.

Andy Knight, an alumnus of Airline, Airport and Aviation Management BSc at London Metropolitan University, is now Aircraft Operations Manager at Heathrow Airport. Andy was the organiser for the event. He commented:

“As a wheelchair user myself, a former pilot and an aviation enthusiast, I am committed to supporting Aerobility and I am proud of the role Heathrow has taken to support its diversity and inclusion goals.

“I hope today will see the team raise a lot of funds for Aerobility’s fantastic causes, but also foster a greater awareness of the unique challenges people with disabilities face in aviation, and push for improvements for their benefit – whether they choose to be a passenger in an aircraft or at the controls.” 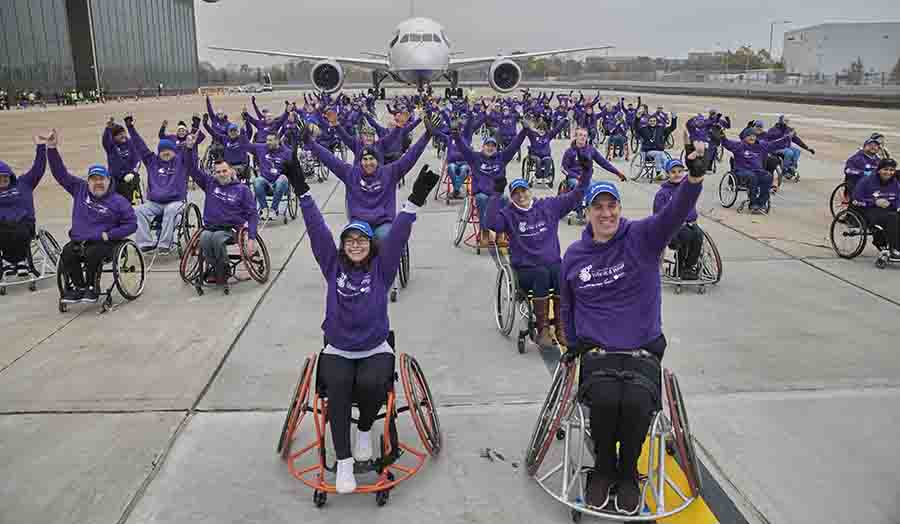