Theatre and Performance students take Italy by storm News from the School of Art, Architecture and Design

Theatre and Performance Practice students take Italy by storm at the CrisisART Festival in Arezzo, Tuscany.

15 students from London Met's Theatre and Performance Practice BA travelled to Arezzo, Italy, carrying all their set, props and costumes with them, to perform at the CrisisART festival at the Accademia D'Elle Arte in the Tuscan hills. Their performance, A Floating Caravan under the Moon, directed and conceived by PhD student Chiara D'Anna, was highly acclaimed at the professional festival. London Met also delivered two workshops for festival participants.

The trip was organised, produced and delivered by the students under the guidance of Senior Lecturer and Theatre Practice course leader Lucy Richardson. Part-funded by Lucy's recent Teaching Fellowship grant, it challenged the student body to create an inclusive ensemble to produce and share work collaboratively. The festival was organised by the CrisisART Collective, whose intention is to foster international collaboration that culminates in a festival of arts and activism, workshops and collective engagement. Our students became part of this collective, and thus also contributed to the organisation of the whole festival.

Chiara D'Anna's practice-based PhD explores the Italian theatre practice commedia dell'arte by attempting to replicate its components for the twenty-first century. Her piece, A Floating Caravan Under the Moon, drew upon the students' own autobiographies to develop "masks" in response to the question, "What is home?". The performance, which was a delightful collage of image, story and song, was delivered in seven different languages by a truly multicultural cast. It became our response to the border crisis and Brexit.

Lucy Richardson and her students also delivered three workshops that explored participatory arts practice and the role of autobiography in performance. Festival-goers were impressed by the quality of the work we delivered and the maturity, openness and creativity of the students themselves.

Visit the CrisisART website for more information about the festival. 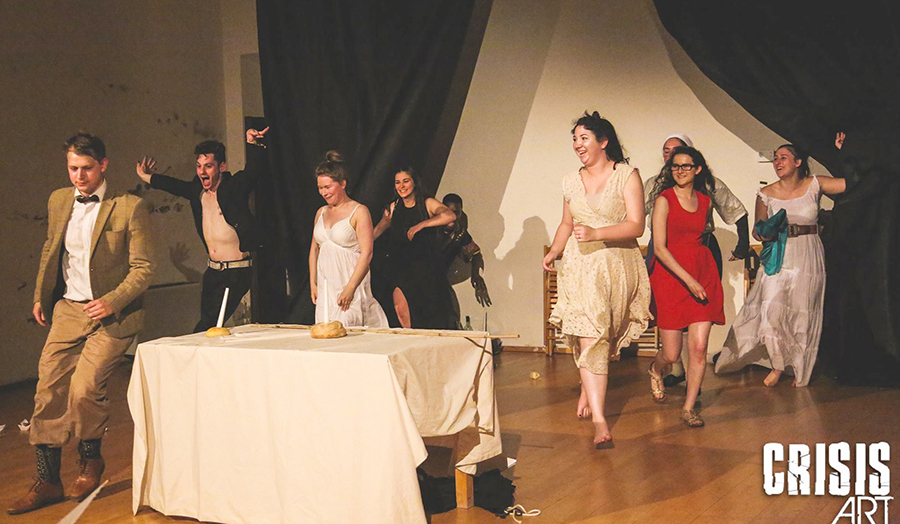