The Palace That Joan Built News from the School of Art, Architecture and Design

Artist Mel Brimfield who teaches on BA Fine Art at The Cass has collaborated with songwriter and composer Gwyneth Herbert for The Palace That Joan Built.

Artist Mel Brimfield who teaches on BA Fine Art at The Cass has collaborated with songwriter and composer Gwyneth Herbert for The Palace That Joan Built, an Art on The Underground Project

Inspired by the legacy of leading theatre director Joan Littlewood and coinciding with the centenary of her birth, The Palace That Joan Built is an unconventional biography composed of posters, photography, performance, film and musical interventions exhibited at Stratford Underground station.

Joan Littlewood played an active role in the local community through her involvement with Theatre Royal Stratford East situated nearby Stratford Underground station. Littlewood’s touring company, Theatre Workshop, was based at the Theatre between 1953 and 1979. During the 1970s when the Theatre was marked for redevelopment, Littlewood’s long-time partner and Theatre Manager Gerry Raffles saved this important Victorian theatre from demolition by standing in front of a bulldozer. Today, Theatre Royal Stratford East continues to produce and stage award-winning theatrical performances, playing a vital role in the local community. The square on which the Theatre is located is named after Gerry Raffles.

Littlewood’s plays challenged historical narratives, social conventions, tradition and authority. In A Taste of Honey (1958) a number of social taboos such as race and gender-roles were addressed, while Oh, What a Lovely War! (1963) presented audiences with an altogether new perspective on World War I.

Littlewood’s personal approach to theatre production was as unconventional as the plays she directed. Evident from her working style is her objection to the traditions and exclusivity of the dramatic arts at that time. A firm believer in collaboration and inclusivity, Littlewood offered a platform to anyone wanting to engage in creative production. By working with local young people and taking her productions out of the Theatre building and onto the streets, Littlewood rejected the conventional practices of theatre and sowed the seeds of early community arts and collaborative practice.

Mel Brimfield and Gwyneth Herbert present a creative exploration of the legacies of Littlewood and the Theatre Workshop Company by adopting a similarly inclusive approach to production. The Palace That Joan Built combines a number of formats, from musical theatre to documentary making. Following a period of extensive research, the artists have responded to the voices of Littlewood’s friends, colleagues and academic researchers. Personal and academic accounts have been paired with interpretations by actors, musicians, choreographers, comedians, and other assorted enthusiasts. The resulting songs, dramatic monologues, staged photographs and fictional archival material are a homage that blurs the lines between fiction and reality, offering a new narrative around the legacy of Joan Littlewood.

At the core of this homage are the unrealised plans for a ‘Fun Palace’, created by Joan Littlewood and Architect Cedric Price.

Cedric Price was a major figure in 20th Century architecture developing radical designs for buildings that were often left unrealised. However, his influence was enormous and is evident today in iconic structures such as the Centre Georges Pompidou in Paris.

Littlewood and Price’s plans for the Fun Palace depict an ever-changing, impermanent space where people could gather, discuss, and realise creative ideas. For them, such a space was instrumental in fostering social change. Hand written notes, sketches, and architectural blueprints, housed at Theatre Royal Stratford East, express Littlewood and Price’s desire for a space that incubated imagination and experimentation. Their vision was to create an inclusive space, accessible to anyone, with varying levels of interest in the arts and sciences.

The Palace That Joan Built is an ambitious project that brings together many voices and disciplines. It draws on the past while offering a contemporary narrative, presenting it within the station that serves Stratford, an area where Littlewood lived and worked for many years. The station itself complements the project through its architecture. Its steel and glass infrastructure bear a similarity to the original architectural plans for the Fun Palace.

Manifestations of The Palace That Joan Built will appear throughout the station in audio and visual formats from October 2014. From spectacular to subtle, these interventions unfold over time offering moments of reflection on the legacy of a pioneering theatre director. 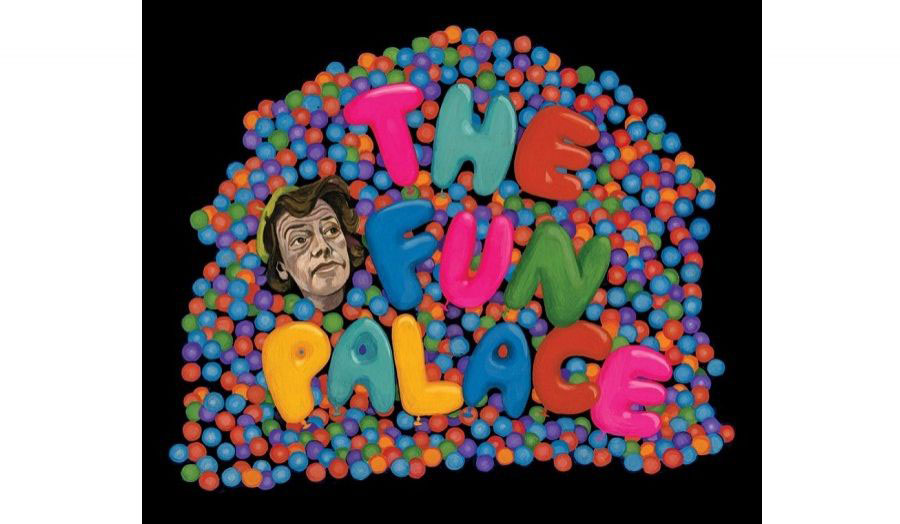