The bacteria and mould lurking on London’s public transport News

Dr Paul Matewele, Senior Lecturer in the School of Human Sciences and expert in Microbiology and Immunology, worked with taxi insurers Staveley Head to put London’s public transport under the microscope.

Taking swabs from taxi cabs, London buses and all London Underground tube lines, the team ran an analysis to discover how dirty public transport in the capital really is. The study found that London transport plays host to a number of bacteria, including nine antibiotic-resistant bacteria identified by the World Health Organisation (WHO) as posing the greatest threat to human health and urgently requiring new antibiotic development.

The London underground was found to be the dirtiest form of transport, with the Victoria line carrying 22 different types of living bacteria, including four from WHO’s priority list.

The tube lines (cleanest to dirtiest) were:

Dr Matewele, who led the study, said: “Not only did we find some of the world’s most dangerous superbugs, but other forms of mould and bacteria that can be harmful to human health were discovered as part of this research. For example, Staphylococcus Aureus was a popular bacterium found upon all forms of transport.

“Bacteria from rodents like rats and mice were also found upon tube lines, along with traces of faecal bacteria and bacteria from sewage. These can cause water infections or skin infections like abscesses if you come into contact with them.”

Taxis in the capital were found to be cleaner than the tube lines – 14 living bacteria were found on average in each cab, as well as traces of faeces and salmonella and buses were shown to host the least bacteria (an average of 8) but the most mould.

Ashley Peters, Managing Director at Staveley Head, commented: “As insurers of taxi and Uber cabs in London, we were interested to see the results of the tests. We’ve always felt that it makes good business sense for drivers to regularly clean both the inside and outside of their vehicles – not least because it can have a big impact on Uber driver ratings - but it’s now also clear that there is a huge benefit in helping to prevent bacteria developing and stopping it from spreading.

The results of the study can be explored in an interactive asset, launched by Staveley Head, where users can explore each form of transport under UV and see the bacteria discovered. Explore the ‘London Under the Microscope’ campaign here.

Image: Screenshot from ‘London Under the Microscope’ interactive website. 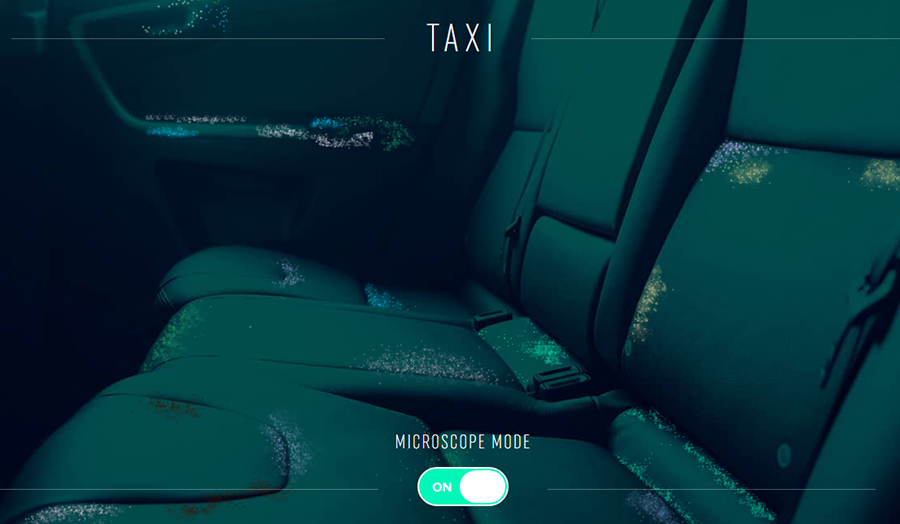