A Holocaust survivor visited London Met on 20 March to share his experience with International Relations students and help them understand the horrors of genocide.

George Vulkan, born in Vienna in 1929, told the students: “One can’t correct what happened 70 years ago but we can learn from it. Holocaust education is part of the curriculum in state schools and more people should learn this history.”

The talk allowed students to ask questions about George’s experiences. One student asked how he came to accept the devastation his family faced. “It’s a new generation and there’s hope in young people,” George answered.

“It’s important that we learn from this. It can’t happen again.”

George explained the abuse he suffered as a child when he left school every day. He and his Jewish friends were met by Hitler Youths and had stones thrown at them, were beaten up, and received verbal abuse.

George explained how he was segregated from other children at school and was forced to sit at the back of the room. He was forbidden from leaving his desk during playtime and had to wait for the other children to return.

The survivor told the students about how he fled Vienna with his parents, uncle and three cousins when he was a child, with just a suitcase and a teddy bear. “No country did anywhere near enough [to help] but Britain did the best by taking 10,000 children,” he said.

The Vulkan family initially fled to France and then to Britain after George’s father and uncle applied for a business scheme to gain entry to Britain. His uncle went back to Vienna to return to his wife, in the hope that his WW1 bravery medal would protect him. “That was the last we ever saw of him,” George said.

“I owe it to my family to do something like this,” George explained. “There are still people who deny the Holocaust ever happened.”

BA Diplomacy and International Relations student, Adriana Ngwodo, said: “I can honestly say that it was one of the most mind-opening days of my life. I have learned that from something that might seem just small and unfair at the beginning can very easily escalate to world tragedy due to the silent majority and that it is extremely important to fight such prejudice from the very beginning.

“As well I would like to thank Dr Moran and London Met for the opportunity to speak to a Holocaust survivor.”

Attia Malik, a BA International Relations student, said: “I’ve never had the chance to meet a survivor before and I’m grateful to be given the opportunity to listen to this story.

“We had a lecture on genocide last week so this talk fits in perfectly with that because we can listen to a real-life experience.”

The talk was arranged in partnership with the Holocaust Educational Trust, who aim to educate young people from every background about the Holocaust and the important lessons to be learned. 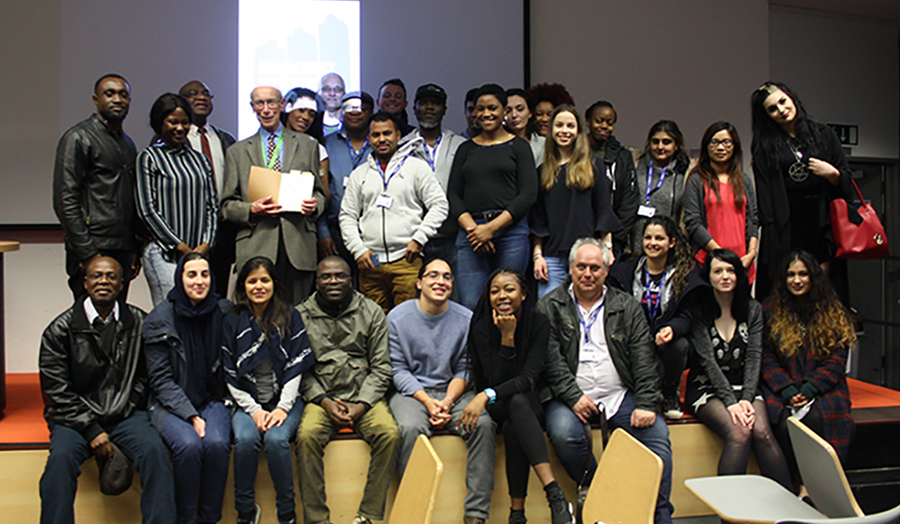