Richard Wilson OBE, aka Victor Meldrew, was awarded an honorary degree by London Metropolitan University at the 2017 Winter Graduation ceremony.

Students who graduated from London Metropolitan University this week were joined by television star, Richard Wilson OBE, as the University bestowed the honour of Doctor of Letters on this talented and high profile actor.

Known to thousands of television viewers as grumpy Victor Meldrew from One Foot in the Grave, Richard gave the country his well-known catchphrase, ‘I don’t believe it!’

Richard started his career as a Biomedical Scientist at Stobhill Hospital in Glasgow. He was successful in this, his first career, until the age of 27 when he was accepted at the Royal Academy of Drama Art (RADA) in the early sixties.

Richard’s acting career has seen him shine on stages across the country, and includes roles in the Royal Shakespeare Company and the National Theatre. He is best known for his television work and in particular his role as Eddie Clockerty in the award-winning BBC drama series Tutti Fruitti and the LWT comedy series Hot Metal.

Richard has won numerous awards for both acting and directing, including two BAFTAs and a British Comedy Award. In 1994, he was awarded the OBE for services to drama as a director and an actor.

Patron of several charities, especially those that support and inspire children and young people, he also supports a range of campaigns for older people as well as the campaigning group Stonewall.

Richard has become a London Metropolitan University Doctor of Letters for his outstanding contribution to the charitable life of the UK and his remarkable achievements on stage and screen, both in front and behind the camera.

London Met’s Winter 2017 Graduation Ceremony took place at London’s iconic Barbican Centre on 4 December. The 800 graduating students were lucky enough to receive some wisdom from 81 year-old Richard about getting started in their post-university careers.

He said: “My tip would be, keep trying very hard and be patient; it’s not going to be easy. Keep involved and keep your brain active. Keep in touch with the profession that you choose for yourself.”

Professor John Raftery, Vice-Chancellor of London Met, said: “Graduation marks an important milestone in our students’ lives, and I’d like to congratulate all of our graduates on their achievement, and thank their families and friends for supporting them along the way.” 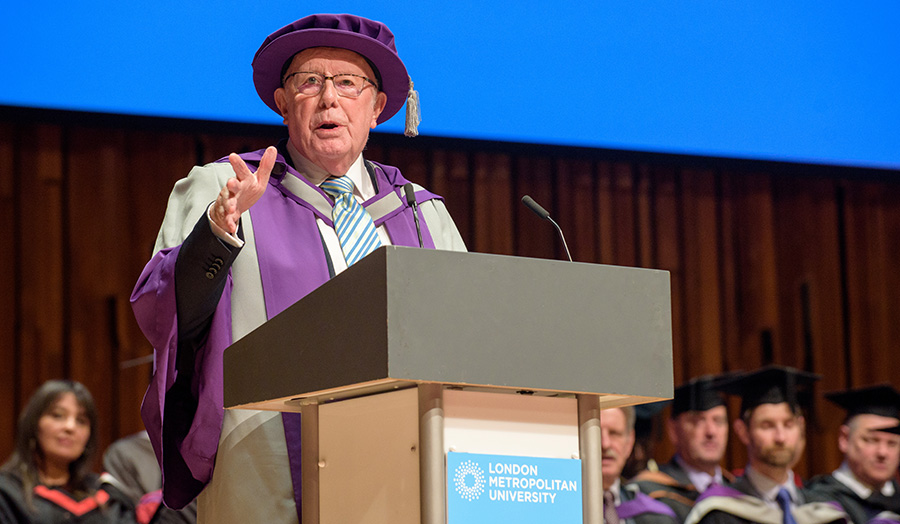