Students' artwork to be installed on campus News

Students to shape Holloway campus after success in Metartmorphosis competition.

The Courtyard at London Met’s Holloway Campus is set to be transformed thanks to a University-wide art competition.

Creative students were invited to enter the Metartmorphosis competition to design a piece of permanent artwork for the popular social space, giving them the chance to display their work publicly and add invaluable experience to their CV.

Entrants were encouraged to consider University-related themes in their submissions, such as the University’s past achievements, the local community, or London Met’s contribution to reducing its environmental impact.

The contest attracted entries from students across all London Met’s faculties, and now three winners have been named.

The first-prize winner was Patricia Leo, an Undergraduate Architecture student in The Sir John Cass Faculty of Art, Architecture and Design (The Cass). Patricia’s proposal was The International Memories Pavilion- a small pergola structure built from locally sourced and recycled bamboo sticks.

Patricia said: “I have always wanted to enter a competition as an Architect but due to the lack of time (or silliness to be fair), I had never gotten around to it. When I saw the opening for the Metartmorphosis Competition, I figured it would be a good start, so here we are. First place. I have wanted to be an Architect my whole life and this is just part of the beginning.”

Patricia grew up in Peru, and this has influenced her work. “Sugar canes, bamboo sticks and reed plants are part of my fondest memories,” she said. “After spending my childhood visiting my grandfather’s farm and watching the farm’s workers build small buildings and structures with these materials, it comes naturally to me as a building, reminding me of where I come from.

“The International Memories Pavilion provides a space where London Met students - whether British or International - can hang any sort of memory that reminds them of home or the place where they come from. It’s also a reminder of everything the surrounds us, and that we are a metropolitan city and a metropolitan university.

“The idea of the pavilion is to have small benches where students can sit at any given time of the day, take a break, and reminisce about home or think about a place they would like to visit based on that week’s hanging memory.”

The other successful entries were Blue Sky Thinking, by Architecture students Anastasia Ridley and Lucy Irvine, and Collective Reflection by Emma Warburton, doing an MA course in Curating the Contemporary.

On Blue Sky Thinking, Anastasia and Lucy said: “We entered because the intention to design and build an intervention in the urban landscape was an exciting challenge that we both have never done before.

“We both were fond of learning through the act of play so our ambition was to create an interactive sculpture which could engage inquisitive people together.

“The aim is to enhance the enjoyment of walking through the Courtyard.”

Emma Warburton’s Collective Reflection, an inverted pyramid built from locally sourced and recycled material, has a similar aim of engaging the entire student body, stimulating reflection on our past and future as a University, as well as supporting the local community.

Along with cash prizes of £500, £250 and £100 for the first, second and third places respectively, all three winners receive a budget of up to £1,000 with which to construct their artwork.

Rachel Ward, Sustainability Manager at London Met who was in charge of the initiative, said: “It was pretty hard choosing our three winners, because we got so many great entries.

“The next steps are to work with the students to develop a project plan and timescales for implementation. We are looking to get all the designs installed in the Courtyard for June to make the most of the hopefully sunny weather.” 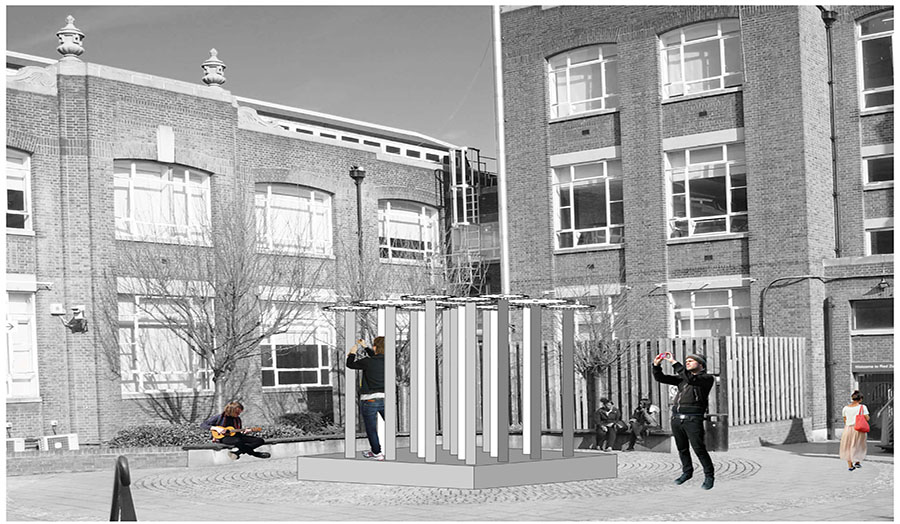