Speed Up or Slow Down? News from the School of Art, Architecture and Design

Accelerationist's affirmation of technological transformation versus the Decelerative Movement in Arts

Lit, an artwork by Alexander Wendt a Senior Lecturer in Music Technology at The Cass was selected for screening at Speeding and Braking: Navigating Acceleration, a conference on May 12-14 organised by the Screen and Audiovisual Research Unit at Goldsmiths, University of London.

Over the past two years, Alexander Wendt has commissioned sound artists, field recordists and experimental composers, including Robert Curgenven (AUS), Jez Riley French (UK) and most recently Charles "Chicky" Reeves (USA) to create soundtracks for his sound-art-video project "Lit – Sunshine Recorder" a black and white video composition, consisting of captured shadow/light-plays that evolve contemplatively slow; it mediates solitude and stillness and was described in Quietus as "bravura, Byronic ... a very '1940s filmic' sweep."

The project explores new interdisciplinary forms of creation, perception and exhibition – sonic arts in context of deceleration. The project was installed and exhibited internationally and joins the discourse on sound-image relationships including in the Netherlands as part of the Drone Cinema Festival.

Acceleration has been characterised as both reason and remedy for the challenges presented by an increasingly fraught global economy – by financial crises, ecological ruination, neo-colonial oppression and forced displacements of an unprecedented scale. The contemporary political and cultural imagination is caught between conflicting velocities: the accelerationist affirmation of technological transformation on the one hand, and decelerative or restorative movements on the other. The conference Speeding and Braking: Navigating Acceleration gathers critical responses to this conceptual deadlock that reach across and beyond such entrenched (op)positions.

The conference explores the material and phenomenological consequences of both accelerations and decelerations, as well as the aesthetic strategies afforded or precluded by them. It is concerned with the material inscription, practical harnessing and social experience of varying speeds, from the perspective of contrasting temporalities. Particular emphasis is placed on transversal approaches reading across, and drawing into dialogue, seemingly incompossible positions within the fields of sonic and visual arts, cultural and critical theory, and media and communications. 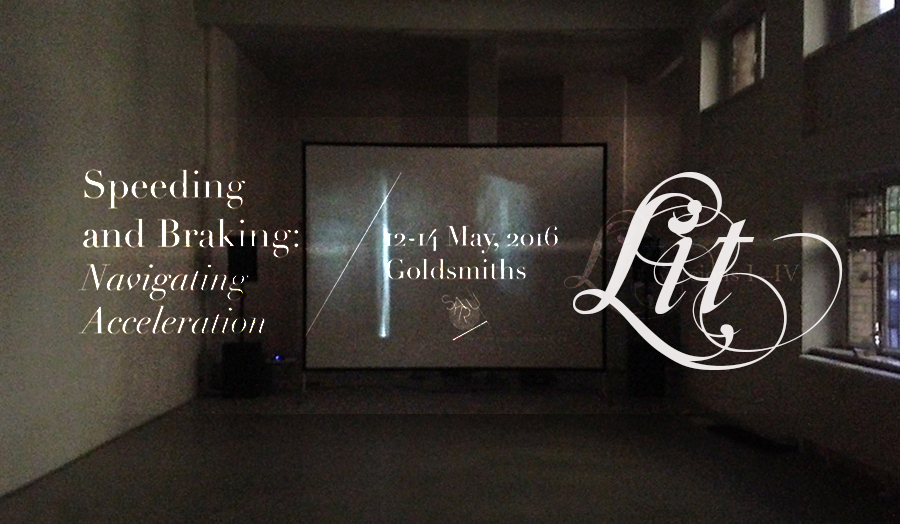