'Reinterpretation' is the eighth volume to be published by the Hidden Space Project group, a collaboration between the Interiors department at The Cass and Dongyang Mirae University in Seoul, South Korea, which investigates abandoned, un-adapted and unused spaces within urban environments.

The book features work by students from both universities, with The Cass group focusing on the Lower Marsh area of London and students from Dongyang Mirae University choosing to look at Mullae-dong Machining Valley, a neighbourhood of Seoul in South Korea.

Lower Marsh is situated south of Waterloo, built on a raised through road over marsh lands and potentially dates back to the Roman era. The area sits in close proximity to the River Thames and has been flagged by the Environment Agency as being at risk of severe flooding.

The Cass students were asked to design a Utopia following the fictional flooding, and subsequent evacuation, of Lower Marsh. The project brief asked them to set up a programme where the inhabitants live as a collective, creating shared spaces that encourage friendly behavior and a sense of extended family.

Kaye Newman, Head of Interiors at The Cass and who co-leads the project with Professor Young Tae Park from Dongyang Mirae University, said: "'Reinterpretation' examines a number of themes and issues surrounding the identity and the make-up of a local High Street. The Lower Marsh area is about to undergo redevelopment, with new shops and restaurants being built, raising unavoidable questions about regeneration versus gentrification.

"We wanted to look at the significance of living in an area like Lower Marsh, particularly having your home situated above a shop, and how the space above is just as important as the shops below."

The Cass group explored ideas which included moving the retail spaces to the upper floors, blurring the boundaries between public and private spaces, developing flexible furniture that can be used both inside and outside and including a police house within the inhabited spaces.

Kaye said "The studio are still developing their ideas but I feel that the job of the interior designer is so important to make these human connected spaces and experiences effective and meaningful, to the point that I would argue that we should be considered as one of the caring industries."

The Hidden Space Project is now in it's eighth year and was established as a collaborative undergraduate research project by Kaye Newman and Dr Sunghee Ahn, now a professor at HongIK University in Seoul, Korea. Professor Young Tae Park now leads the student group from Dongyang Mirae University and each annual research project is celebrated with the publication of a book documenting the students' work.

The Hidden Spaces project will focus next year on immersive retail design and the effect of Wi-Fi on interiors. 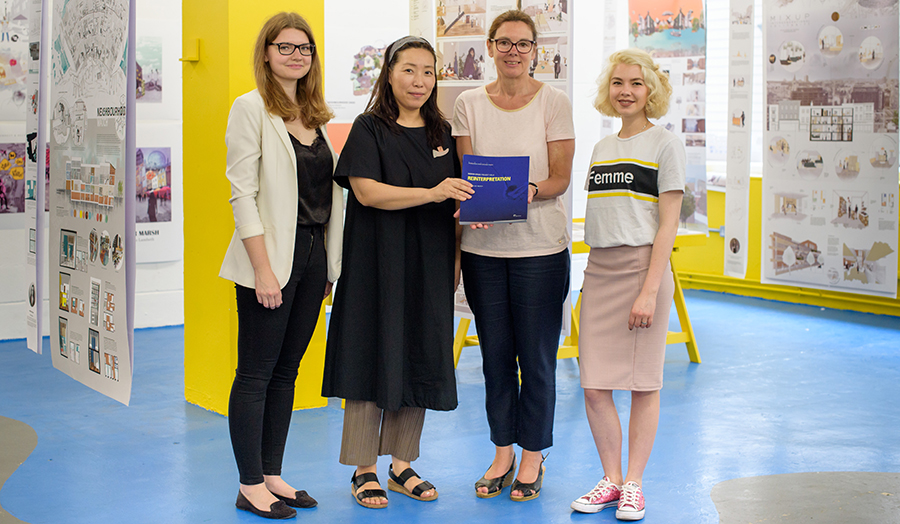