London Metropolitan University has won best Energy Institute Energy Manager of the Year which was announced in an awards ceremony held last night.

Held at the London Hilton, Park Lane, the Edie Sustainability Awards celebrate sustainability excellence, from large multi-national businesses to the smallest micro-organisations from across the public and private sector.

It was announced that London Met’s Sustainability Manager, Rachel Ward, won Energy Institute Energy Manager of the Year. Daniel Connor, Energy Manager at npower, and Oliver Rosevear, Energy and Environment Manager at Costa Coffee, were also nominated for this award.

Under Rachel’s guidance, London Metropolitan University has reduced its carbon emissions by over 50% from a 2009 baseline and become a sector leader in energy efficiency. The University has been named as the Number One University for carbon reduction in England and Wales in 2015. This was achieved by developing excellent working relationships with the infrastructure, projects and IT teams, implementing energy projects and creating a programme of behaviour change.

Zanda Pipira, Sustainability Assistant at London Met, said: “Working with Rachel has been empowering. She really strives for making a difference here at London Met and that has inspired me to think more about my future in the sustainability and energy sector.

“As a manager, Rachel motivates, encourages and supports me with my work. Rachel is a great mentor leader and I have learned a lot since we started working together a year and a half ago. I truly enjoy working with her.”

London Met was also nominated for best Energy Management. The achievement is partly attributed to the University’s project, ‘Lighting Up London Met’ which consists of three main areas – installing 3,170 LED lights, 221 PV panels and 914 windows. The project was implemented as part of the Mayor’s RE:FIT scheme, an award-winning and tried and tested programme to help make London’s non-domestic public buildings and assets more energy efficient. It was introduced to London in 2008.

As a result of the success of this project, the University has met and exceeded its carbon reduction target of 50% by 2020 based on a 2009 baseline four years early.

Rachel said: “I involve students in the majority of energy projects to give them the opportunity to learn in a ‘living lab.’ A glazing project was taking place where architect students are taught which allowed practical work experience to be undertaken.

“Students were involved in every aspect of the project from using their designs for the finished windows, monitoring the building before and after work to using waste products from the construction in their artwork. This turned a project which could have been quite disruptive into a positive experience.”

Other initiatives taken on by the sustainability team include installing two beehives on the roof and introducing the Green Impact programme to staff at London Met, as well as installing 221 solar panels on the roof.

Rachel recently spoke to Edie about sustainability at London Met which can be listened to in a podcast.

Find out more about sustainability at London Met. 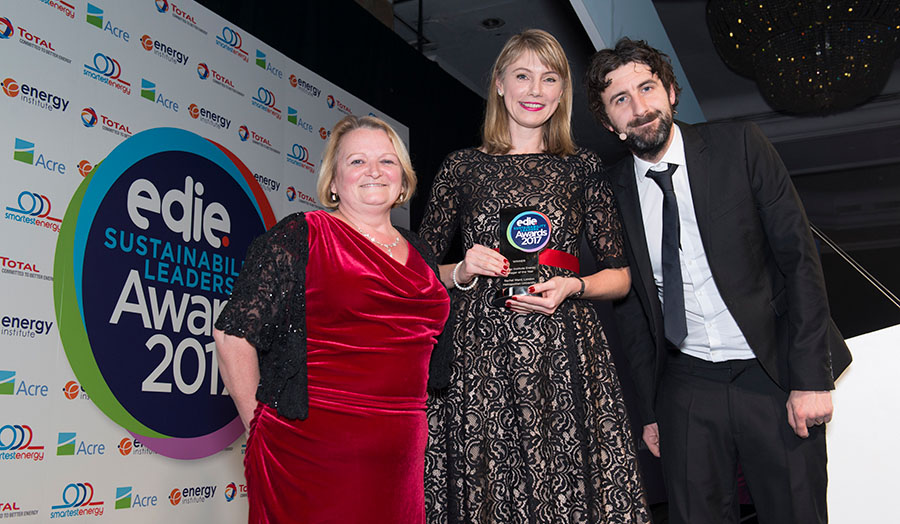