The father of Stephen Lawrence, the London teenager who was stabbed to death in 1993, was joined by Metropolitan Police Commissioner Cressida Dick, to speak at a London Met symposium.

In an emotive speech, Dr Lawrence called for more to be done to tackle the ‘growing problem of knife crime’ and spoke of the loss he still felt: “The day after my son’s murder, I thought it would be in the papers the next day and I thought there would be an outcry. But there was nothing.

“I still visit my son’s grave and see people he grew up with having their own children and all I can think is whether he would have had his own.”

The audience was gathered for a high-profile symposium, organised by the John Grieve Centre for Policing and Community Safety at London Met, to examine the progress that has been made twenty years on from the start of the Macpherson report into the murder of Londoner Stephen Lawrence.

Dr Lawrence was joined in the opening panel by Cressida Dick, London Metropolitan Police Commissioner; and Professor John Grieve QPM, Head of the John Grieve Centre for Policing and Community Safety. Paul Giannasi, Police Hate Crime Policy Lead, then took the conference through the state of progress on the 70 recommendations made 20 years ago.

The speakers acknowledged that there remained a great deal to be done, but that remaining problems tended to disguise the fact that there have also been very many changes for the better, and that were a direct result of Dr Neville and Baroness Lawrence’s persistence in seeking justice.

Ms Dick cited the range of measures that the Met Police have undertaken to tackle the problems posed by knife crime such as increasing stop and search by around a third, putting extra effort into community engagement and assured the audience that change was an ongoing process: “We have a zero-tolerance approach to racism in policing and we will go on relearning the lessons from the Macpherson enquiry and improve as an organisation,” she commented.

The conference then developed ideas mainly from community groups, on what changes would be beneficial, not only to police-community partnerships, such as that forged by the Jewish protection group, CST, but also by improving opportunities and raising aspirations for young black people through mentoring and training.

The symposium also served as an informal relaunch of the John Grieve Centre for Policing and Community Policing, based at London Metropolitan University.

The Centre’s founder and Head, Professor John Grieve, said: “The John Grieve Centre has made some valuable contributions to the policing society and we hope to continue to do so, in the first place, by publishing our analysis of the response of the delegates at the conference through the app supplied to everyone at the event.” 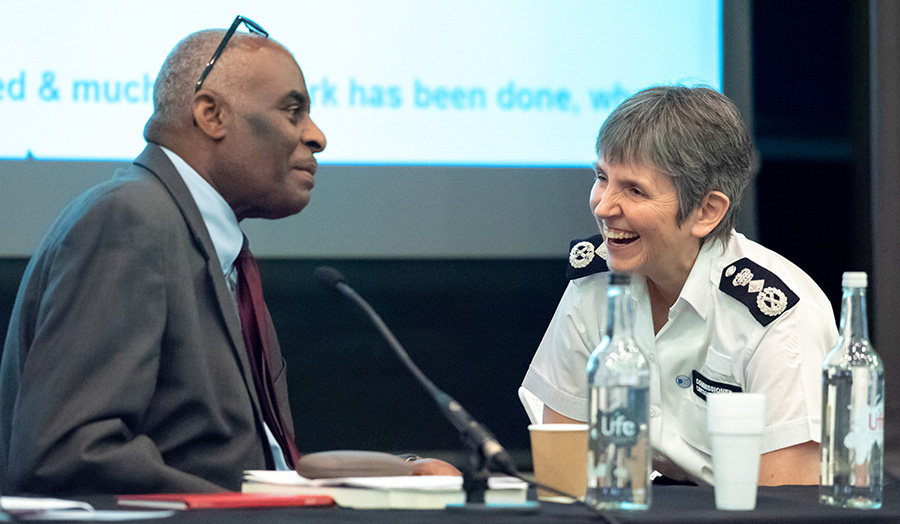