President Michael D Higgins visited the University to view collections from the Archive of the Irish in Britain.

The President of Ireland, Michael D Higgins, visited London Metropolitan University in May 2016 to view collections from the University’s Archive of the Irish in Britain.

Part of London Met’s Irish Studies Centre, which celebrates its 30th anniversary this autumn, the Archive contains compelling artefacts relating to the Irish community’s experience in London and the wider UK.

President Higgins was shown a display of items from the Archive, including the first edition of The Irish Post newspaper; a letter from Paul Hill of the Guildford Four, written to his mother while he was in prison; and the archive’s oldest item – a Victorian book on Irish saints in Britain.

Speaking on how he was impressed by the Archive, President Higgins commented:

“The Archive is an important part of Irish heritage and in particular its migrant history. The artefacts on display show the generosity of Irish families who have made their lives in London.

"The great migratory wave of the 50s is very important as is the material on the origins of the Chaplaincy Service and the Federation of Country Associations.

"The very early material in Irish, in the original Irish font, has valuable material that includes the work of Ireland's first President Dubhghlas de hÍde and work by the famous migrant writer Donal Mac Amhlaigh."

The President met with the Vice Chancellor, Professor John Raftery, and guests including the family of the late Seoirse Ó Brion, who donated much of the original material to the Archive, and volunteers who help run it today.

Professor Raftery said: “It is an honour to welcome a Head of State to London Metropolitan University to see first-hand the important work we do. I am particularly pleased to be able to show President Higgins some of the poignant and internationally significant collections we have here which tell the story of the Irish in Britain.

“Our local area, Holloway, has a strong Irish community and we’re proud to be home to the Irish Studies Centre at this landmark moment in its history."

The Irish Studies Centre was founded in 1986 and was the first of its kind in Britain when it opened. Its main purpose is the promotion of Irish Studies through teaching, research, archiving and community liaison.

Dr Tony Murray, Director of the Irish Studies Centre, said: “We were extremely excited to learn that the President wished to come to London Met to see our Irish in Britain collection during his visit to the UK.

“When the Archive was originally established in the 1980s, there was still little recognition of the contribution of Irish people to this country. Having expanded it considerably since then, it is now regularly consulted by researchers, students, and media professionals from Britain, Ireland and the rest of the world.

“It was a pleasure and an honour to be able to share this with the President today.” 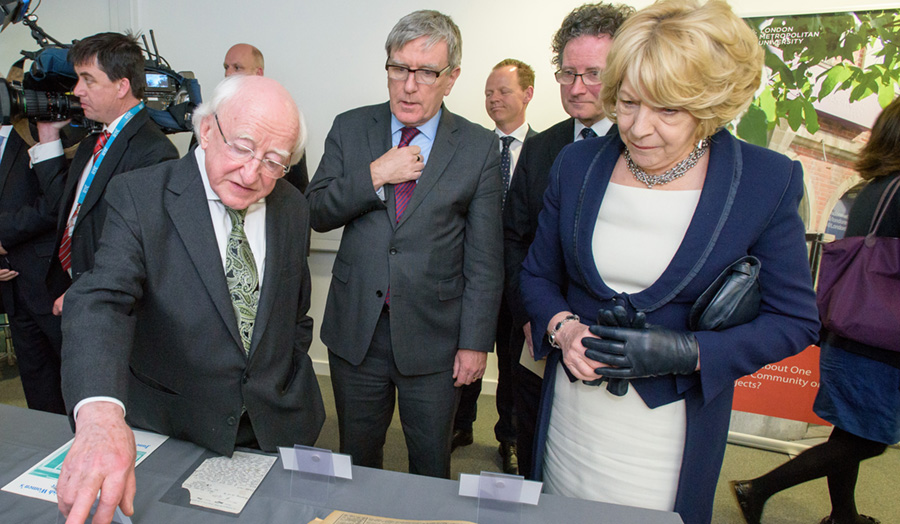