One Minute Wonders! News from the School of Art, Architecture and Design

The One Minute Film Festival (OMFF) is a showcase of one-minute films made by students of the 1st year BA Fine Art at The CASS School of Art.

The One Minute Film Festival (OMFF) is a showcase of one-minute films made by students of the 1st year BA Fine Art at The CASS School of Art.

Students were invited to participate in this initiative by making a one-minute film that fulfilled a specified criteria: films had to be made with a mobile device, be one-minute long and be creative.

The one-minute film idea came from the team of tutors of the 1st year BA Fine Art. Tutors shared the initiative with students: “let’s put together a one-minute film fest, it will be fun!”. However, it took some time before the students took up the idea, and, for a while, it seemed that the project would just fade into oblivion. But eventually, and after some further encouragement, a team of students came forward with the determination to making it happen. These students are Konstantins Nikiforovs, Edyta Michalska and Mar del Corral.

Mar, one of the coordinators, looks back at her experience about being involved in this initiative: “It is nice to see how an idea can be made real with the joined effort of your team and the people that collaborate to make it a reality. Such a beautiful experience."

The team got together to organise themselves with the aim to turn an initial idea into a fact. They called themselves the Coordinating Team, and they started the ball rolling by posting a call out on Weblearn, which was well received by the rest of students. The call out provoked a succession of enquiries that the Coordinating Team spent some time answering and clarifying. They also took on the tasks of helping fellow students with technical issues, making sure the films were produced within the deadline, collecting them and handling different digital formats, as well as dealing with any other practical aspect of the project.

Konstantins, another member of the team recalls: “During the process of collecting the films we had many questions from students who were asking us questions about the festival, and about the concept behind one-minute films. We had questions like: What should the film be about? How should it be edited? Should it be a one minute exactly? Should it have music? Is it part of a module? But, is it compulsory?  Answering those questions made us realise that the main difficulty we had was to attempt to create something that had almost no rules.”

But the dedicated team pursued in getting the initiative off the ground. Edyta, another member of the coordinating team, shared her video editing skills with students who needed help and advice. “Helping some contributors editing their work before giving it to us was”, she asserts, "a great and enjoyable experience". And she remarks: “It wasn't an easy experience! Sometimes technical issues can be extremely frustrating, but we all managed to not only survive but deliver all their short movies. So yes, in fact, I found this experience very enjoyable.”

Konstantins also observes: “I have gained a valuable experience on how to collect, organise, encourage and finalise short films. I am more confident now in making a little one-minute movie, as well as in managing the amount of one-minute film entries we have had. The idea is to create a showreel out of all the contributions. I think It is important to have a clear picture of the whole project right from the beginning (which I think we didn’t have), but by working in this project we have learned a few lessons: next year we will be more clear about the final product, and about how to submit it to the team, and also about having a place to present the festival and display the showreel.”

The three members of the Coordinating Team are now reflecting on what they have managed as a team, which has left them with a positive and encouraging a sense of achievement. Mar states that normally “[teamwork] starts as an idea that has to pass through different stages to become a reality. The process is the most difficult part, but it is a nice reward to see that all you have done has had a final result, achieved by the collective efforts of working in cooperation. This is a very empowering experience.”

Edyta also suggests: “Knowing that it will definitely happen again next year, now I think that we can all get better prepared about things such as 'what' and 'how' to film … so no more random shots!”.

The team is finally celebrating the completion and the launch of the 1st OMFF. And, they remind us: “We’ve got now an amazing team working experience, which we are going to nurture and strengthen in order to come back stronger next year!”

Therefore, let's keep up with the challenge, as Konstantins' admits: “A one minute length was a good challenge to try out my creativity!". Let’s all be ready for next year’s OMFF.

Abstract of one of the interviews that the three members of the Coordinating Team made between themselves:

Mar: How do the clouds smell?
Edyta: Haha! ... Depends on what they are made from. If it is going to rain, clouds smell like rain, they are heavy, low, kind of just flying under our heads and they smell like steel watering cans, if the weather is very dry (rather not very often in England) they smell like Sahara’s sand, like a T-shirt’s print being burned under the hot iron while ironing…

The Coordinating Team would like to thank both Andrew Hewish for his one-minute film fest's idea, and Francesca Vilalta for instigating and facilitating the team to its collective achievement. 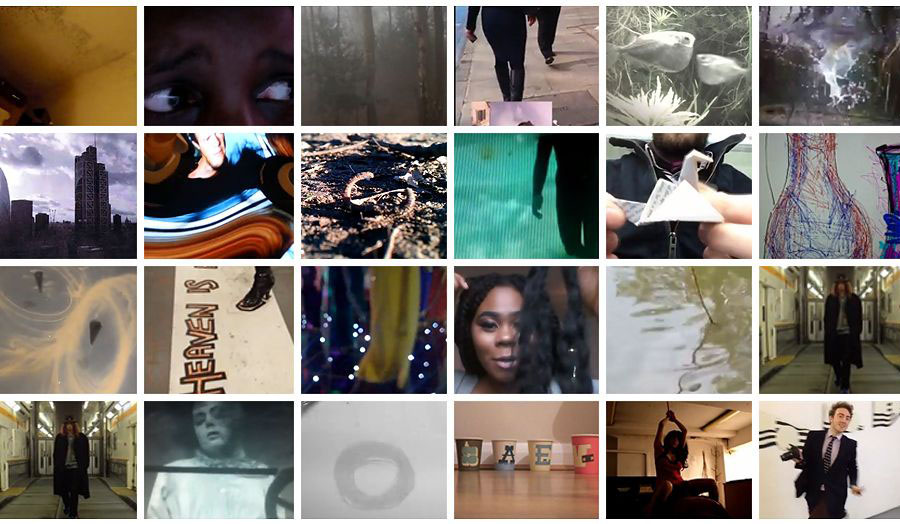