Omicron variant: what it is and what it means for us. News

By now most of us will have heard of Omicron, the name given to the new SARS-CoV-2 variant of concern (VOC). This is the fifth VOC to be declared, following the emergence of Alpha, Beta, Gamma and Delta earlier in 2021. Omicron has scientists worried because of the number of mutations found within its genome. We know that RNA viruses such as SARS-CoV-2 mutate, but the sheer number of new mutations in Omicron is unprecedented.

Just looking at the Omicron spike gene, because this encodes the critical part of the virus allowing cell entry and is the main target of our immune responses, including from vaccinations, it has 33 mutations or changes in its sequence. This might not seem a lot for a virus protein that has over 1000 parts to its sequence but it is the location where these changes tend to cluster and the differences from the existing four VOCs that have increased the worry factor. For example, the smaller region of spike known as the receptor-binding domain (RBD) and responsible for interaction with human cells, contains a staggering 15 changes. Some are shared with other VOCs but 11 of these have not been seen until now. Other regions of the Omicron spike also have significantly more changes than previous VOCs, including many unique mutations that as yet don’t provide clues as to how the virus will behave.

What we do know is that this combination of mutations is giving Omicron an advantage in transmission over Delta, the VOC that until now had been dominating globally. In Southern Africa, where Omicron was first identified, the majority of new infections based on genome sequencing data are due to Omicron and the case numbers are rapidly increasing, having recently doubled in just 24 hours in South Africa where just 24% are fully vaccinated. We also know that Omicron, since first being announced as a VOC on November 25th, has now spread to at least 24 countries, including the UK. That list will surely grow over the next weeks and it is entirely likely that Omicron will displace Delta as the dominant SARS-CoV-2 variant in circulation in all territories.

We still do not know if Omicron is more virulent than previous VOCs. Although hospitalisations are increasing in South Africa, there is no suggestion that it causes worse disease than Delta. We also do not know yet if Omicron can escape immunity generated by vaccinations or past infection. However, the combination of mutations, especially those within the spike RBD where most protective antibodies are thought to act, will inevitably result in some reductions in the ability of immunity to stop the virus.

Omicron is in the UK and will likely spread widely within most communities in the coming months. The advice is to get fully vaccinated, including booster jabs, stick to control measures such as distancing and wearing a face covering, and avoid large gatherings where possible. At London Met, evidencing a negative lateral flow test is a requirement to enter the buildings, which should limit the spread of Omicron in our University community. Continuing to abide by these conditions should minimise the chance that Omicron can badly affect our community this winter. 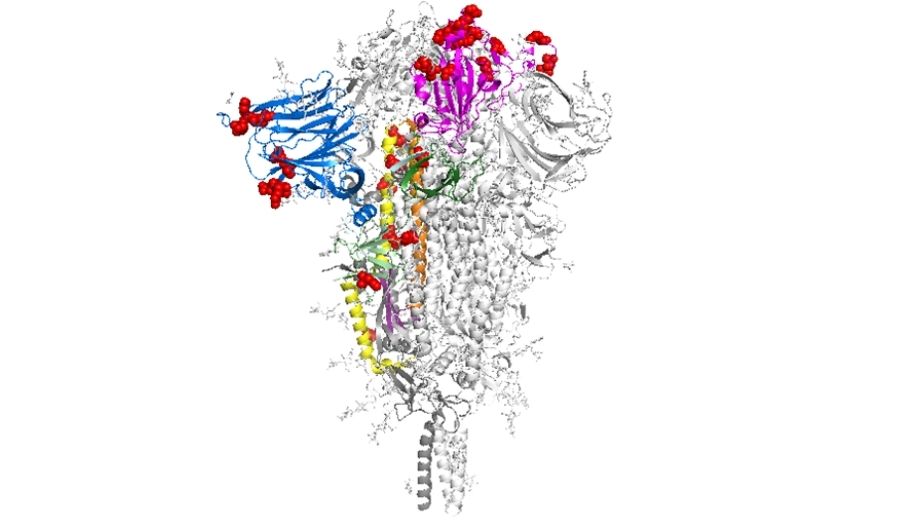 The above photo is a digital map, created by Prof Gary McLean, which shows the mutations within the structure of the virus.