Nye Thompson Lumen Longlist News from the School of Art, Architecture and Design

Nye Thompson, a postgraduate Fine Art alumna from the Cass, is a finalist in the international Lumen Prize 2019. Her work Words That Remake The World has also been included in the shortlist for Lumen's 2019 Rapoport Award for Women in Art and Technology.

The image, which is part of her longform project The Seeker, is included in the Still Image category of the prestigious international awards which celebrate the best art created with technology.

Since the beginning of 2016, Nye has been documenting and exploring the global phenomenon of self-surveillance through the artwork Backdoored, which collects and archives images taken by searchbots through unsecured security cameras. Backdoored sparked a global debate about privacy when it was originally exhibited at The Cass in August 2016. Contunuing the theme of creative engagement with digital technology and surveillance, The Seeker ( 2018- present) is a 'Demiurge AI', a machinic entity, which travels the globe virtually looking out onto our world and describing its visions. Installations from the project have been exhited globally including at the V and A in London, ZKM in Karlsrune and Chronus Arts Centre in Shanghai.

Nye Thompson on Words That Remake The World

This drawing is one of the outcomes from my ongoing project ”The Seeker”. The Seeker is a machine entity - a proto-AI - which travels the world virtually looking through security camera eyes and using image recognition technology to describe what it sees. The drawing contains all the words and phrases that The Seeker has used to describe its visions in the tens of thousands of locations around the world that it has ‘visited’ in the last 2 years. It represents a kind of mapping of an AI’s developing conceptual landscape. With accelerating advances in Machine Learning/Artificial Intelligence image recognition and object identification software, an entirely new way of seeing the world is evolving. One where the relationship between viewer and viewed will be transformed, and everything seen is objectified. This evolving machinic visual landscape will become codified within the DNA of future intelligent systems and AIs. What are the machines learning to find worthy (or unworthy) of their visual attention? The Seeker was named for Ptah-Seker, the artist/technologist god of the Ancient Egyptians, who created the world by speaking the words to describe it. This work considers the power implicit in the act of describing a scene - choosing what objects and concepts to include or exclude, and what terminology to use in defining them - and how the act of describing the world might come to establish a whole new worldview for machines and humans alike.

The 2019 Lumen prize winners will be revealed at an Awards Ceremony on the 24th October at The Barbican Centre in London.

Image: Installation of Words That Remake The World «The Seeker» by Nye Thompson ( 2019) 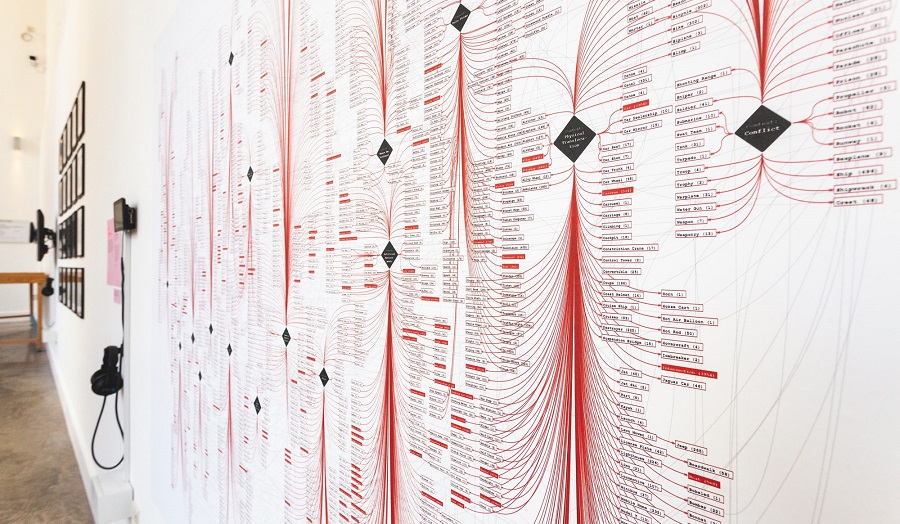