LAST CHANCE TO SEE: First exhibition of the series by award-winning Photographer Lottie Davies In partnership with Laura Noble Gallery.

Image: Analysis of Viola and Twins by Lottie Davies

The Cass Gallery is delighted to present Memories and Nightmares by Lottie Davies, in partnership with Laura Noble Gallery.

Lottie Davies work is concerned with stories and personal histories, the tales and myths we use to structure our lives: memories, life-stories and beliefs. She takes inspiration from classical and modern painting, cinema nd theatre as well as the imaginary worlds of literature. She employs a deliberate reworking of our visual vocabulary, playing on our notions of nostalgia, visual conventions and subconscious ‘looking habits’, with the intention of evoking a sense of recognition, narrative and movement.

Davies’ unique style has won her recognition and numerous awards, including the Association of Photographers’ Awards, the International Color Awards, and the Schweppes Photographic Portrait Awards.

She has exhibited extensively throughout Europe and the USA. Davies’ work has garnered international acclaim with the image Quints, which won First Prize at the Taylor Wessing Photographic Portrait Awards 2008 at the National Portrait Gallery in London, and with Viola As Twins – from the series Memories And Nightmares, which won the Photographic Art Award, Arte Laguna Prize in Venice in 2011 and for the series memories and nightmares she won the Young Masters Award in December 2012.

Her Elaborately staged scenes are the visual manifestation memories and nightmares, one of her own the day my brother was born and others gleaned from other people. The multiplicity of the layering in her photographs through analogy, metaphor and physical placement gives each image the possibility of numerous interpretations. Self-fulfilling prophecies can often have a rippling effect as the series has delighted audiences throughout the world, whom have re-interpreted and projected their own histories within her imagery.

These are not quiet pleasant photographs to glance upon. They are bold, strong - intensely intriguing - parodies worthy of prolonged viewing. Davies images are for the strong willed, confident individual who is not afraid to face their demons. Colour is key to her work; using bold imaginative strokes she wields the lens towards her meticulously constructed tableaux. Furniture, costume and props are found to build each individual set around her models that are varied and striking in equal measure. Intricate planning and careful placement render her work truly mesmerizing. Strong emerald greens, reds and turquoise feature throughout which immediately grab our attention as the subtleties of detail come into view, whether it be the strange impossible reflection in a mirror or the rocking horse in a maternity ward.

These invented realities give rise to emotional responses, with audiences gripped by the scale of her imaginings. The seamless duplication of one baby in quints left audiences astounded, as it is rarely believed that only one infant was used to create five. To find out more about each memory or nightmare, please contact the gallery or see the story which inspired each image in the captions on Davies’ website. 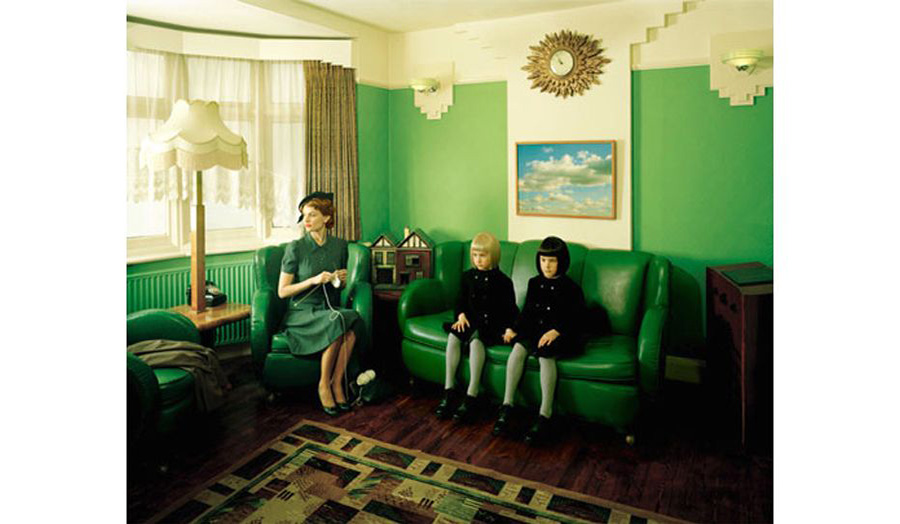