"Green Impact is about the positive changes you make in the work environment. It is these changes in behaviour you take home with you," says Alex Massey, Events Manager at London Met.

London Met’s student venue The Rocket, alongside the Commercial Business team, have once again taken part in the University’s Green Impact scheme.

“One of the key projects we have undertaken this year is to reduce the amount of single-use plastic and non-recyclable products we use in The Rocket, including drinking straws and disposable coffee cups,” said Alex Massey, Commercial Events Manager at London Metropolitan University.

“We are only just scratching the surface of this challenge, but to begin with, we have switched to compostable coffee cups and lids, and are advertising the University's re-useable cups.”

The team have introduced a surcharge on disposable coffee cups to try and encourage students and staff at London Met to bring their own reusable mug.

Lauren Tindall, Assistant Venue Manager, added: “One of our areas which we enjoyed most this year is increasing the biodiversity within the inner courtyard which forms part of The Rocket venue, putting up bird feeders, looking after plants and keeping it free of mess from students and staff!

“We have had the pleasure of seeing a variety of animals including ducks and ducklings, herons, blue tits, yellow wagtails, robins, a variety of insects and even a cat.”

As with last year, the team are headed by Winston, a green alpaca mascot. Winston can be found tweeting at @LondonMetEvents and doing his part to campaign for more reusable mugs at the University and to reduce the number of plastic straws used in The Rocket. 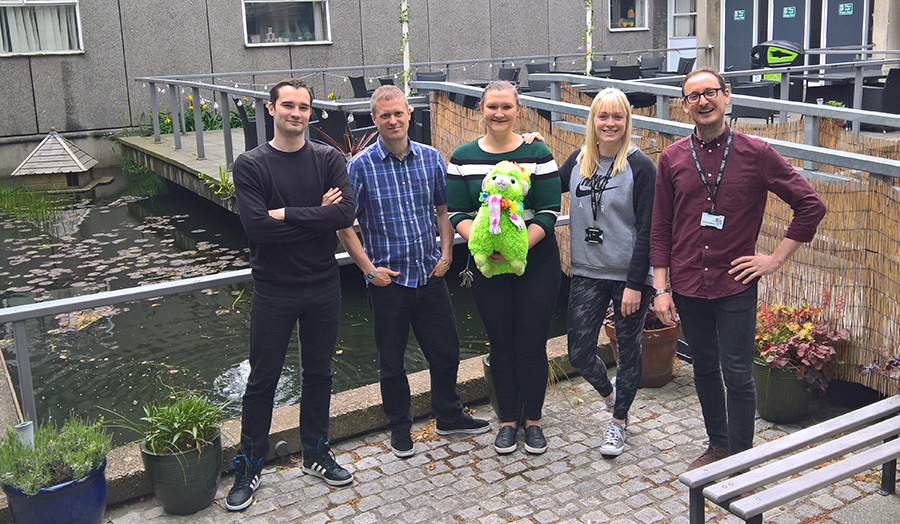