Mayor of Islington officially opens the Great Hall, describing it as "part of the fabric" of the borough.

London Metropolitan University’s Great Hall was officially reopened by the Mayor of Islington at a special ceremony on 29 April.

The grand Victorian venue on Holloway Road, with its original features fully restored, is now available for use by the local community and the general public. The Mayor of Islington followed in the footsteps of a former Mayor of London, who first opened the hall in July 1897.

Councillor Theresa Debono, the current Mayor of Islington, said: “The Great Hall is part of the fabric of Islington, and has been for many years. Just like London Met itself, it is a very important part of the local community.

“It is lovely to see this great refurbishment – you look up at the beautiful ceiling and just have to keep looking!”

Cutting the ribbon, the Mayor said: “It gives me great pleasure to declare the Great Hall open to the people of Islington.”

Over the last 118 years, the Great Hall has served as a venue for spectacular dances, musical and operatic recitals, awards events, student examinations and even as an emergency medical centre.

A number of these occasions were highlighted in an exhibition on history of the Great Hall and the University, which was assembled especially for the opening.

Pieces from the University archives on display included programmes of numerous Gilbert and Sullivan operas performed by the University’s operatic society and photographs of the former in-house organ that once occupied the stage.

The Hall once hosted the first ever public display of a large screen television and in darker times sheltered over a thousand Londoners from Zeppelin air raids in the First World War.

Speaking at the event, Professor John Raftery, Vice Chancellor of London Met, said: “Ever since the Northern Polytechnic Institute opened the Great Hall in 1897, it’s had a rich cultural life. From Gilbert and Sullivan performances to boxing matches and Arsenal supporters’ events, it has played an important role in the community.

“I want to thank everyone who has helped to restore it to the amazing space we see here today.”

Over a hundred staff and guests attended the event, which marks the completion of the ambitious renovation project by the University’s Estates team.

Caroline Jackson, the University’s Director Estates, said: “The Great Hall can cater for a wide range of events, such lectures, conferences, performances and dining.

“A lot of people worked very hard on this project, and it’s one of the best cases I’ve seen of people working together. The Great Hall has been at the heart of the University for over 100 years, and it’s nice to think that it may now still be here in another hundred.”

The Hall’s original Victorian features have been lovingly restored including the ceiling’s ornate plaster mouldings, classical frieze and sculptures, now protected behind a glass screen.

Alongside the renovation of its original features, the Hall is now equipped with energy efficient lighting and a new heating and cooling system.

The space will now be used for throughout the year for exams, conferences and events, as well as, being available to hire for local community groups and the general public.

For further information about hire rates and bookings please contact the University’s Venue Hire team at conferences@londonmet.ac.uk or by calling 020 7133 2645. 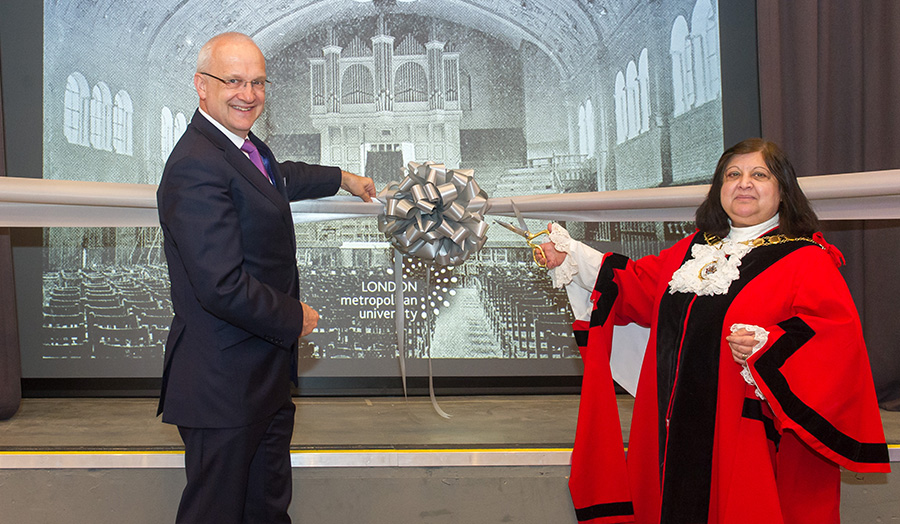