London Metropolitan University has unveiled a new mosaic memorial fountain and plaque in honour of Giovanni Lo Porto, an alumnus of the University.

Who was Giovanni Lo Porto?

Giovanni studied Peace and Conflict Studies at London Met, graduating with Upper Second Class Honours in 2010. He devoted his life to humanitarianism, working with aid charities across the world in Pakistan, Croatia, Bosnia and Burma.

On 19 January 2012, shortly after Giovanni’s arrival in Multan, Punjab, he was kidnapped with co-worker Bernd Muehlenbeck. Muehlenbeck was released in October 2014, but Giovanni remained captive. He was killed in an American counter-terrorist drone missile operation on 15 January 2015, somewhere on the border region of Pakistan and Afghanistan.

Jamie Dineen, an International Relations and Peace and Conflict Studies alumnus and student with Giovanni, said, “He [Giovanni] acted on his beliefs and will never be forgotten.”

London Met hosted a memorial ceremony at the University to honour Giovanni’s life and work and to give his friends and family the chance to speak about him, describing his “kindness” and his unique ability to help everyone no matter their situation.

The service was opened by Professor John Raftery, vice chancellor of the University who said described Giovanni’s life as “impressive” and as a man who “lived a life of consequence”.

Charly Burridge-Jones, alumna and close friend of Giovanni, worked with the University to organise the service.

Giovanni’s friends gathered to share their memories of him, Sarah Neal, who won a scholarship with Giovanni remembered his support, recalling that on dissertation deadline day, and although he had handed his work in a day early he still came into university to support his classmates through their stress.

Originally from Italy, many of Giovanni’s Italian friends managed to attend the service, one commented, “It’s nice to see so many people here.”

“How many people can say they are missed by people they have never met before? Not many,” says a former colleague of Giovanni Lo Porto.

Remembered as a student

Mike Newman, former Peace and Conflict Studies course leader and current Emeritus Professor of Politics, said Giovanni “sought to combine practice and theory.” He described the humanitarian worker as a student who was constantly thinking about the truth.

Professor Newman said, “He [Giovanni] was a warm, friendly, open-minded person who played a really important role amongst his fellow students and who was also very popular with staff.

“He had been a humanitarian aid worker long before he came to London Met and he enriched the discussions for us all by drawing on his experience in complex situations in many parts of the world. He was a great intellectual asset to the degree, but above all he must be remembered as a genuine humanitarian in all senses of the word.”

“Like many of our students, Giovanni joined the university having already gained a great deal of experience of the world. He brought his knowledge and skills as a humanitarian aid worker into the classroom, but always approached his studies with humility and a desire to improve his understanding,” says Steven Curtis, current course leader for Peace and Conflict studies and one of Giovanni’s former lecturers.

“For him, the study of peace and conflict wasn't a dry academic subject, but something he wanted to learn about in order to be better able to bring about positive change in the world.”

“London Met attracts the most extraordinary students; people who want to change their own lives and make a significant difference to others. Giovanni was not unusual in that sense, but what makes a difference is that he put himself on the front line to provide the most basic of resources such as clean water,” said Andrew Moran, one of Giovanni’s former lecturers.

The memorial was designed by London Met student Emma Warburton, who studies MA Curating the Contemporary at The Cass. The memorial is now a permanent part of the University and can be visited in the Blue Zone at London Met’s Holloway campus.

Emma said, “It’s a wonderful compliment to be asked to make something that will be on display, and in memory of another person and despite having only made one mosaic before, I couldn’t turn it down. I am a real believer in being creative with space; I wish our culture and our society was more accepting of creative interventions in public space. And so, having said that, any opportunity to inject a bit of beauty or aesthetic interest into an otherwise generic space, I will take. Especially if it’s for such an honourable cause as to celebrate a special, warm and selfless person; someone like Giovanni.” 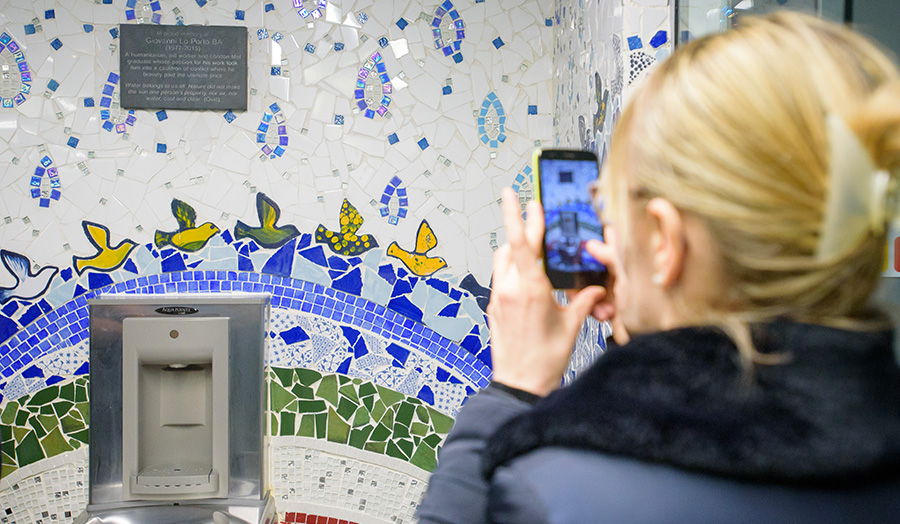