The University has again been named among the best in the country for reducing carbon emissions.

The progress report by Brite Green, a sustainability strategy consultancy, analysed the carbon emissions data of all 126 Higher Education Funding Council for England (HEFCE) funded institutions in England, placing London Met second in the league table for ‘Absolute Carbon Reduction from 2005 to 2014/15.’

The University has seen a dramatic improvement in carbon reduction, with emissions being reduced by 51% since 2005 - the baseline used by all universities.

Rachel Ward, Sustainability Manager at London Met, said: “It is a real achievement to be recognised for our efforts. At London Met, our ‘Green Team’ are always thinking of new initiatives and ways in which we can do even more to reduce our carbon footprint.”

The report shows that 71% of universities in the UK are not projected to meet their 2020 emissions target. So far, London Met has reduced carbon emissions by 51% exceeding its original target of 33%. The success highlights just how seriously London Met takes environmental sustainability and the need to be a responsible participant in London - a city with clean air challenges.

London Met’s success is being noticed. On 22 September, Rachel took part in a podcast for Edie.net - one of the world’s most influential sustainability websites - to discuss how the University contributes to carbon reduction.

Recorded in the University’s journalism studios, senior reporter Matt Mace said he was at the University to talk about “the impressive, low carbon legacy that has been developed here.” Listen to the podcast.

How was it achieved?

The University has introduced a wide range of initiatives since 2014 to tackle carbon emissions. The Lighting Up London Met project has seen the University install solar panels as well as plans for 3,170 LED lights across the three campuses, and 914 windows upgraded to double glazing.

London Met’s Vice Chancellor, Professor John Raftery, said: “Our success with sustainability is the result of hard work and determination from our outstanding sustainability team and the engagement in this issue by our students and staff.

“We are constantly building on these efforts, and have this year installed 221 solar panels on the roof of our Science Centre, and run schemes, such as Green Week, to engage with our community.

“The work is important to London Met and our neighbours, and we are exploring new curriculum innovations to complement our excellent sustainability efforts.”

You can keep up to date with the Green Team on twitter.

Pictured are members of London Met's sustainability team with the beehives. 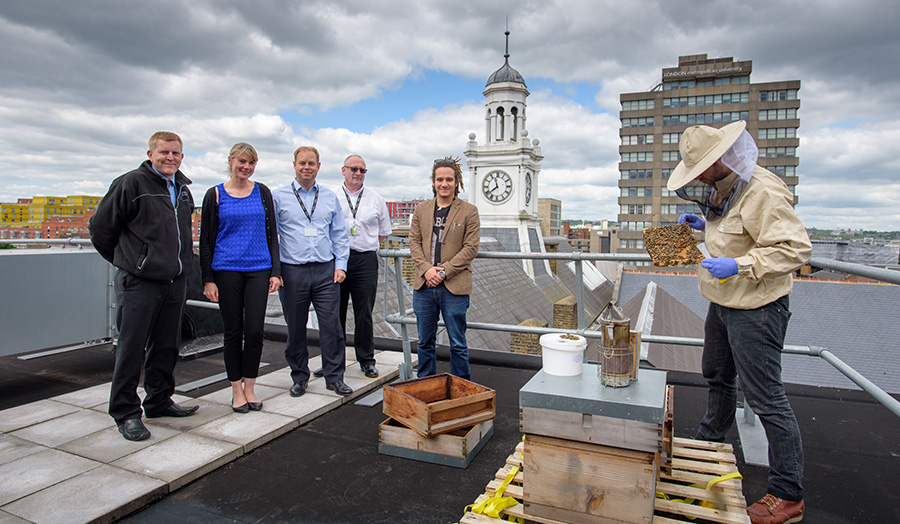