Over 10,000 votes were cast from 124 countries in this year’s Big Idea Challenge

More than 200 people celebrated London Met’s Big Idea Challenge 2016 at a special awards night in the heart of Tech City.

Wanderlost, a social enterprise which helps support care-leavers through the therapeutic art of baking, won the top prize.

The business idea is the brain child of American students Nicole Page and Whitney Papa, who met on their public administration course at London Met. They developed their idea while volunteering for the Islington based Help on your Doorstep charity.

“We both knew that we wanted to do something to help young people leaving care,” said Nicole.

“We thought about what we had in common and then one day we just realised that we both love pie! And the idea just grew from there. Baking is a really therapeutic process, it can be very creative. I remember baking with my grandmother as a child, and all my problems just went away.”

Wanderlost is a mentor-ship led cafe and bakery project which puts care-leavers at the centre of the business and its operations, with the profits going back into supporting young people.

Whitney said: “I lost my grandmother when I was very young, but one of the things I remember is baking with her. That aspect of family life is something that thousands of young people have missed out on, and we want to create an opportunity to experience some of that and the joy of baking. We think this will really do a lot to help young people.”

There were 13 finalists in the Big Idea Challenge, which is split into three categories; Social Impact, Creative and Commercial.

The Creative category was won by Sophie Holden with her idea, Belle of the Bows; a platform for cheerleaders and customers to design their own hair bows through an easy-to-use app. Sophie, a fashion student at London Met, said: “I broke my ankle when cheerleading so was unable to perform for a while. Bows are a really important part of the uniform in cheerleading, so I decided to spend the time designing a really great bow!

“I posted it on Facebook and it just went crazy, with over 600 shares, and before long people were asking to buy them. I’ve now sold over 500 to places as far afield as Sweden and the US.”
Just Honest Cosmetics, which makes purely vegan and natural cosmetic products, scooped the People’s Favourite Award, judged by a public vote in which over 10,000 votes were cast from 124 countries around the globe.

The idea belongs to chemistry student and vegan Tom Dolmon. He said: “My business will mean people know exactly what’s in the products that they are putting on their skin. It’s amazing to win tonight and it gives me the confidence to pursue my idea further. We’re going to make this happen.”

Winners of the Big Idea Challenge receive prizes worth £30,000, including a professionally designed website, a market research report, a place on the Accelerator’s Launchpad programme – which comes with office space - professional PR advice, logo and brand packaging, as well as expert mentoring and support.

The grand champions of the Schools and Colleges Big Idea Challenge were students from BSix College, Clapton, with their entry ‘Seed Card’ – a biodegradable gift card which contains seeds, so people don’t throw cards away but plant them instead.

Toby Kress, Head of Accelerator- London Met’s business incubator which runs the Big Idea Challenge - said: “When we decided to open up the competition to a younger audience we had no idea how big it would become. It’s been amazing to work with so many young people in schools and colleges across London, and hearing some of their brilliant ideas for businesses.

“We are always looking to find young people who want to do something big with their lives, and it was great to see the ambition and innovation that we’ve witnessed in this year’s competition.”

The competition was only possible thanks to partners including Microsoft, NatWest, Unilever, KPMG, Calacus, Mark Test, Lucidica, The Numbers Coach, Cup of 3 and SC Patients. 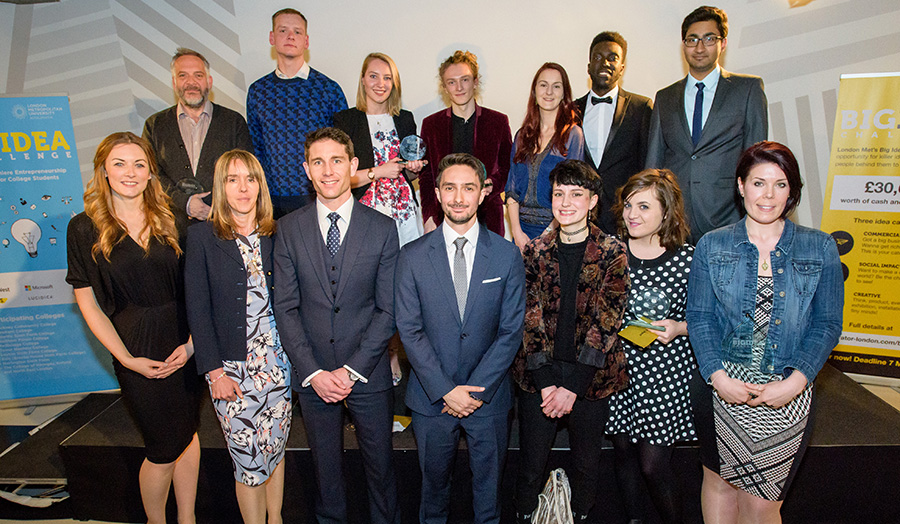