Official figures reveal that 95% of all graduates are in work or further study six months after leaving London Met.

The results of the Destinations of Leavers from Higher Education survey show that 95% of all 2016 graduates were in work or further study six months after leaving London Met.

It’s a huge success for the University, which has seen graduate employment increase by nearly 10% over the last four years.

The news follows a recent refocussing on employment skills in the University, which runs an innovative ‘work related learning module’ offering guaranteed work-based learning to all undergraduate students.

More than 1,300 students have taken part in the module so far, with over 190 organisations partnering with the University to offer work placements and live projects.

LLB Law graduate Shahana Tariq took part in the Work Related Learning module in 2016 as part of her course. Her 25 day work placement at the Rashid & Rashid Law Firm, in Wimbledon, led to the company offering her an extension.

“It’s definitely a worthwhile experience,” she said. “It teaches you lots of skills that you may have read about in books, but not practiced for real. Speaking in front of clients really developed my confidence, and that’s something you cannot get from just writing essays.

“It definitely gave me a flavour of what it’s like to work in a law firm.”

Other initiatives to improve students’ employability skills include the London Met Graduate Internship Scheme, launched in 2014, and extracurricular opportunities such as the Big Idea Challenge.

Professor John Raftery, Vice Chancellor of London Met, said: “I am delighted and proud to see London Met achieve its record graduate employment score, which reflects the hard work my colleagues have done to help our students achieve more when they leave us.

“Improving student outcomes is a principal aim of our Strategic Plan, which we developed together in 2015. Today’s success shows that our Plan is working.

“London Met exists to meet the needs of our time. The London Met community is focused on helping our students to be fully prepared to step up into the highly skilled jobs that drive the economy in London and beyond.”

The impressive news follows a string of successes for London Met, which was recently named the best ‘millennial’ university in the UK, and among the top 20 globally, by the Times Higher Education.

Want to do something you love? London Met can take you there. Apply today 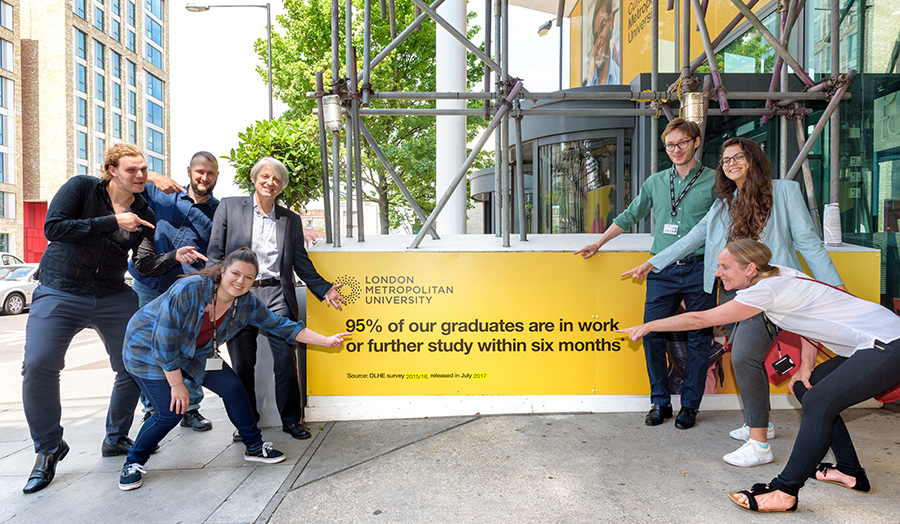