The definition outlines that 'Islamophobia is rooted in racism and is a type of racism that targets expressions of Muslimness or perceived Muslimness.'

London Met has become the first UK university to adopt the working definition of Islamophobia as developed by the All Party Parliamentary Group (APPG) on British Muslims.

The APPG recommended the adoption of the following definition: Islamophobia is rooted in racism and is a type of racism that targets expressions of Muslimness or perceived Muslimness.

Professor Lynn Dobbs, Vice Chancellor of London Met, said, “I am very proud that the University has today voted to adopt this definition. By doing so we are making a commitment to tackling Islamophobia and creating conditions within our community that deliver equity for all.”

“Eliminating racial and religious bias is central to the University's commitment to being an inclusive and welcoming space for all. This shouldn't be a controversial decision and I hope that we will be the first of many universities to adopt the working definition, leading the way on tackling racism.

“We hope that the adoption of this working definition will signal to Muslim students and staff at London Met as well as within our local communities that that we will actively tackle Islamophobia, and work hard to ensure they are represented and supported at every level of university life.”

Dr Zainab Khan, Pro Vice-Chancellor and Director of London Met’s Centre for Equity and Inclusion, said: “We know Islamophobia presents itself in a number of forms; from disproportionate levels of surveillance often arising from an inference of involvement in extremism; to the ‘othering’ of Muslims through suggestions that they are a monolithic group with static views and beliefs; false suggestions that Islam is incompatible with British identity, to threatened or actual violence. Any exclusionary or discriminatory practices must be challenged, and all forms of harassment and hate must be met with zero-tolerance.”

Further to the definition offered by APPG, we recognise that whilst this is not a universally agreed-upon definition - which is often the case when attempting to encapsulate the breadth of oppression into a line or two - we understand Islamophobia to not only be rooted in racism but also rooted in the prejudicial and disproportionate vilification of Muslims’ theological beliefs (credit Dr Fatima Rajina - Stephen Lawrence Research Centre, De Montfort University). Therefore, at London Met, we aim to eradicate Islamophobia in its many forms.

The adoption of this definition extends to ensuring inclusive action is taken at the University to enable all students and staff to thrive at London Met. The University is undertaking a review and enhancement of its policies and complaint processes to ensure that our systems recognise the nuanced nature of Islamophobia in all of its manifestations - both overt and covert. Alongside this we are launching a major staff development programme in 2021 which will see all staff at the University undertaking Inclusive Behaviours training to support the development of their understanding and capacity for championing equity and inclusion across identity issues.

This announcement comes following new recommendations from Universities UK to tackle racial harassment and racial inequality in UK higher education. London Met is making good progress in a number of areas highlighted by the report and hopes to see further decisive action across the sector follow.

Co-chairs of the APPG Anna Soubry and Wes Streeting MP wrote in a report on the inquiry into the working definition, “the effects [of Islamophobia] are seen in individual behaviours and institutional processes. Whether it is Muslim women who are denied job opportunities because they wear a headscarf, gurdwaras that are defaced because they are mistakenly identified as mosques, or Muslim students who fail to secure entry offers from Russell Group universities, the effects of Islamophobia are real and measurable.

“The normalisation of Islamophobia has long passed the ‘dinner table test’. It now presides in such ‘banter’ as ridiculing Muslim women’s dress to draw parallels with letterboxes and bank robbers, and in political disputes that are aggravated using glib tropes of suicide vests. The elision of Islamophobia into everyday bigoted discourse is not only indicative of how low the threshold has fallen, but it is also, more alarmingly, redolent of its diffusion to the point of evincing conscious and unconscious biases against Muslims.”

“We know all too well that both the process of defining - one which does not undermine or marginalise the viewpoints of the victim group itself - and the meaning attached to the word are necessary if bigotry directed at particular sections of our society are to be widely understood and challenged.”

London Met will be marking the adoption of the definition with the launch of its report Institutionalised: The Growth of Islamophobia in UK Higher Education researched and produced by Sofia Akel, (Centre for Equity & Inclusion). We will be hosting a panel discussion to explore Islamophobia within Higher Education on 13 January 2021, the event is open to London Met staff, students and external guests. 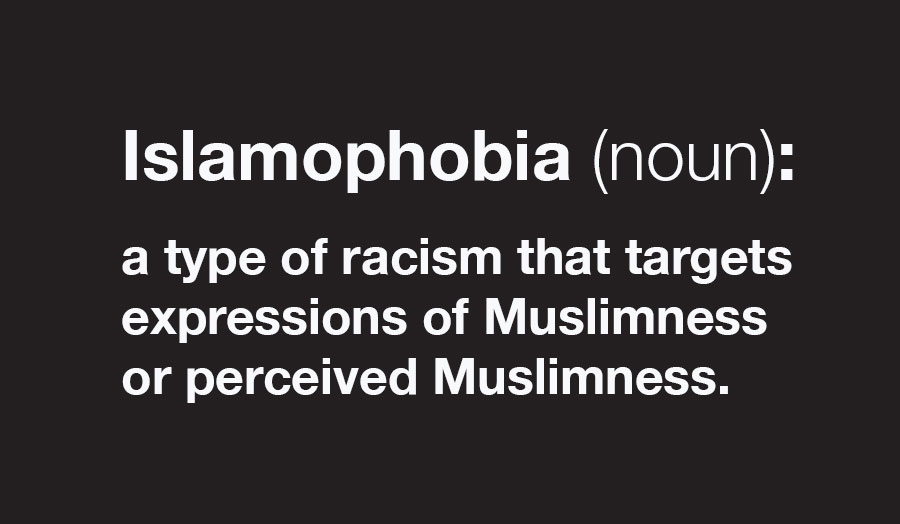