London Met alumnus is artist in residence at Grow Pod News from the School of Art, Architecture and Design

Gareth Jones, an alumnus of The Cass, has become the first artist in residence at Grow Pod, Hackney’s new community venue.

The 'Grow Pod' detached building, designed by Studio Bark started life as a Garden Room for an East London community centre. The pod was later relocated in Bicester where it became Studio Bark’s site hut for the summer. Following its most recent move to become part of Grow's eco-system, it will be adopted by a number of different Hackney residents over the next 6 months.

Gareth Jones, who studied MA by Project at London Met’s School of Art, Architecture and Design, The Cass, will spend time in the pod seeing how it and the environment can support his practice as well as exploring a new series of works that will take reference from the surroundings. He will also document in photos his experience of the pod as a flexible and adaptable working space.

The design principles of this low-impact 'U-Build' pod came out of Studio Bark's desire to make construction truly affordable and self-built, opening up the prospect of self-led construction to a greater proportion of the general public. The structure incorporates a long pop-up hatch window (powered by reclaimed car-boot pistons), a modular (locally sourced) Douglas Fir skin, and modular green roof.

You will find Gareth and the Grow Pod at Grow Hackney which is an independent bar, kitchen and creative space carved out of an old sausage factory by the River Lea in Hackney Wick. It is run as an experiment in ethical and sustainable business and works in partnership with local artists, musicians, DJs and community groups. Events are free, from live jazz and blues, open deck reggae, open mic and art festivals. 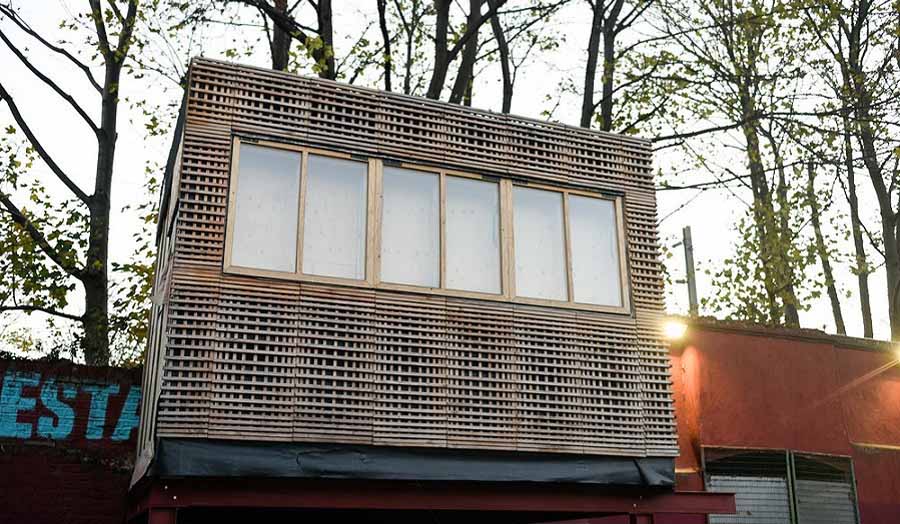