A London Met alumna is making headlines in the jewellery world thanks to her unique style, inspired by the meeting of cultures.

A London Met alumna is making headlines in the jewellery world thanks to her unique style, inspired by the meeting of cultures.

Sarah Ibrahim, who studied for a Certificate and Diploma in Jewellery at The Cass, draws on both eastern and western styles in her work – a result of a childhood spent between Brunei and the UK.

“I have a Bruneian father and a Belgian mother,” said Sarah. “I lived in Brunei until the age of 13 when I started boarding school in the UK. My work reflects this and is very much a combination of the east and west.

“It ranges from special, intricate collectable pieces to more simple, fashion-led ones.”

Jewellery making was not Sarah’s original choice of vocation however, and she studied graphic design at university. Yet she did not feel fulfilled and began looking for something more hands-on.

After discovering the medium, Sarah knew she needed to improve her skills, and London Met was the place for her.

“I chose London Met because it has a great reputation and offered the course I wanted. The tutors and facilities were all brilliant and I gained the skills to be able to turn the ideas in my head into real pieces.”

Since finishing her course Sarah has enjoyed many successes, with the highlight so far being her selection for Kickstart, the prestigious showcase of up-and-coming talent at the leading tradeshow International Jewellery London. She was one of a small number of designers featured.

“Being chosen was a massive confidence boost. It’s definitely been the highlight of my career so far.”

Sarah’s aim for the future is to become more widely recognised in the industry. And, with her work appearing in various galleries and successes such as Kickstart, it seems she is well on the way to realising her goal.

London Met offers a range of courses to help you build a career in jewellery, including BA Jewellery and Silversmithing. 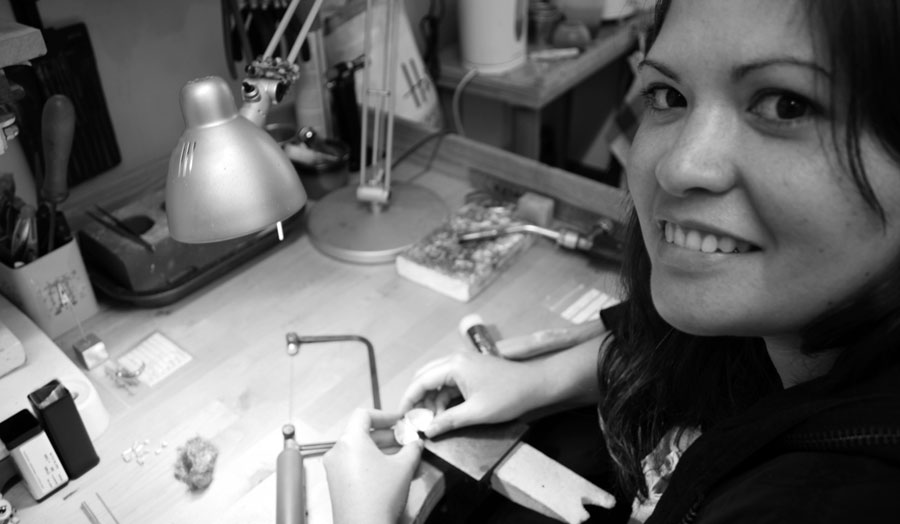