Letters from the archives of London Metropolitan University’s Irish Studies Centre will feature on BBC Radio 4 this Saturday.

The radio documentary From the Inside: the Guildford Four is based on the prison letters of Paul Hill, who was wrongly convicted of participating in the 1974 Guildford pub bombings by the IRA.

The letters are housed in the Centre’s Archive of the Irish in Britain, based in the School of Social Sciences at London Met. Written to his family while in prison, Hill’s letters range from the angry and evocative to the poignant and passionate.

“These letters are a very significant body of evidence for not only historians of British-Irish relations during the late 20th Century, but more generally researchers interested in miscarriages of justice and human rights abuses,” explained Dr Tony Murray, Director of the Irish Studies Centre and Senior Lecturer in English Literature at London Met.

Hill was one of four people wrongfully convicted for the Guildford bombings of 5th October 1974, in which five people were killed and over sixty people were injured. The Guildford Four were finally released from prison on 19 October 1989 after a long campaign on their behalf.

The collection of over 600 letters was donated to the Archive on the Belfast man’s behalf by his uncle, Errol Smalley, in 2001. The manuscripts chronicle Hill’s 15-year incarceration in British prisons from his conviction in 1975 to his release in 1989. The collection also includes Hill’s heavily annotated prison bible.

The University is now seeking to digitise the collection to broaden access to such an historically important resource.

“We do not currently have the resources to digitise the collection, but are seeking funding to do this,” added Dr Murray. “Forty years on from Hill’s original conviction, it would be fitting if this moving personal story and vital slice of British-Irish history was made more widely accessible.”

Located within the School of Social Sciences, the Archive of the Irish in Britain is consulted on a regular basis by students, researchers and the media. Originally established in 1984, the archive moved to the Irish Studies Centre at London Metropolitan University five years later.

From the Inside: the Guildford Four will be broadcast this Saturday, 4 October at 8pm on BBC Radio 4.

The Paul Hill Prison Letters are available for viewing by contacting the Archive at irishinbritainarchive@londonmet.ac.uk 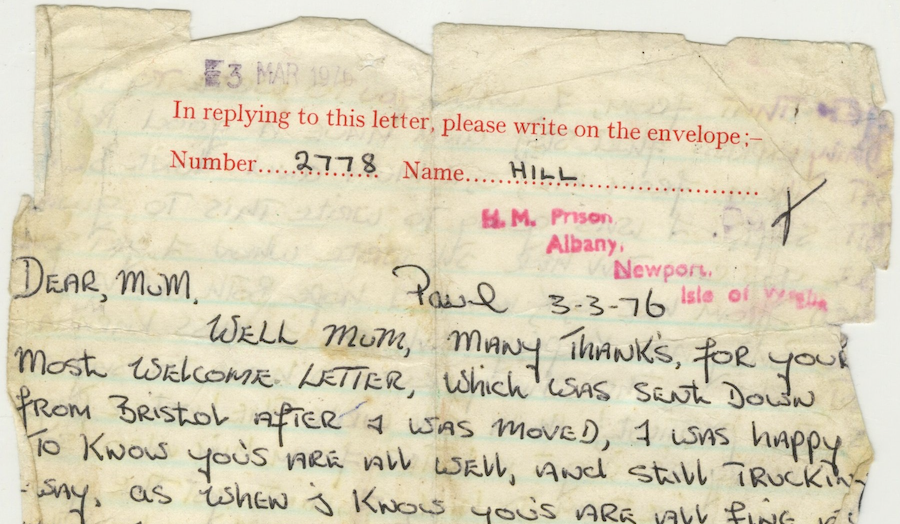