A London Met student was invited to attend a world celebration at the House of Commons in order to engage with MPs on behalf of Amnesty UK.

Marie-France Nguo (pictured), an International Relations, Peace and Conflict Studies BA student at London Metropolitan University, was recently invited to attend the House of Commons as part of her commitment to Amnesty UK to celebrate International Human Rights Day.

Outside of her university studies, Marie-France volunteers as a School Speaker and Country Coordinator where her role includes engaging with primary and secondary school students to introduce them to the topic of human rights and to educate about what Amnesty UK aim to achieve.

“My role primarily is to help deliver campaigning on Amnesty UK’s portfolio of Individuals at Risk cases along with projects and campaigns,” said Marie-France.

Marie-France attended Amnesty UK’s annual Human Rights Day reception at the House of Commons in December 2017 where she had the unique opportunity to engage with political leaders such as, Leader of the Opposition, Jeremy Corbyn MP.

She developed an interest in Humans Rights prior to joining London Met whilst working with refugees in the Democratic Republic of the Congo, Marie-France’s home country. “While working with a refugee organisation, I had witnessed an increased amount of domestic violence cases within the Black African community,” she said.

“Most of the victims were unable to seek help and support to overcome or flee the abuses. It was so sad to see so many women suffering in silence and this condition sparked an interest in me to advocate for those women.That is why I joined the biggest Human Rights campaigns organisation in the world.”

Marie-France chose to study at London Met in order to enhance her deep rooted interest in Human Rights. “I was curious to learn about peace and conflict which I am not disappointed about. What is lacking in today’s world is the lack of promotion of peace. We have focused on wars too much that positive peace cannot been seen as a reality.

“I like the fact that my course analyses the objectives and methods of particular organisations, focusing on their policies, practices and theoretical approaches.”

Amnesty International is a global movement made up of over seven million people. It is the world’s largest grassroots human rights organisation. Amnesty investigate and expose abuses, educate and mobilise the public, and help transform societies to create a safer, more just world. 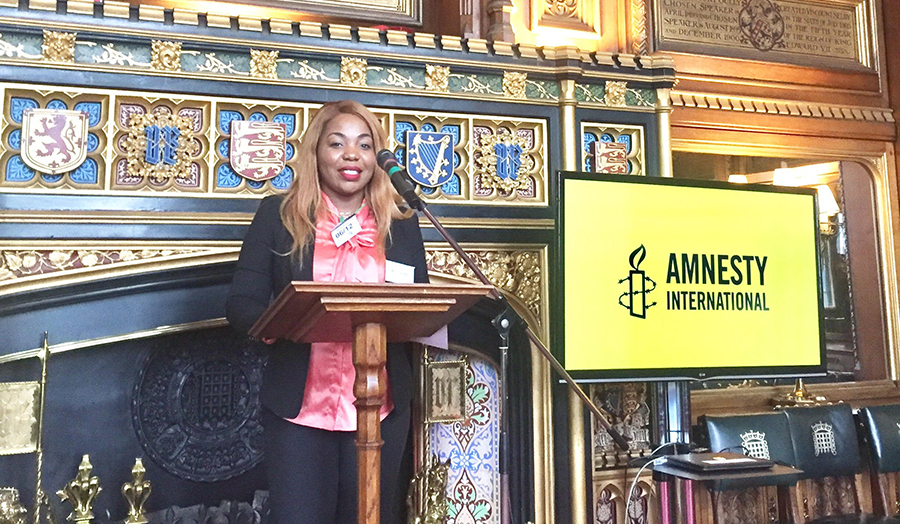