IDEA Advocacy Lab News from the School of Art, Architecture and Design

The Cass is delighted to be hosting the latest Art and Design Advocacy Lab from the Charity IDEA, with speakers including top political cartoonists Martin Rowson, Gary Barker and Kate Evans.

Art and Design for Advocacy Lab brings together young people, youth workers, activists educators and some truly amazing guest speakers to experiment and collaborate together to develop comics, zines or cartoons that gets their message out into the world.

The Lab is designed in an engaging and interactive way to provide people with an opportunity to understand the role of art in raising awareness of the causes they care about, whilst developing critical thinking skills and tolerance of diverse views and other peoples’ opinions.

IDEAs goal is that participants in this two-day lab use and pass on these essential skills for advocacy to their peers across the UK and have some fun in doing so.

IDEA's mission is to ensure young peoples’ voices are heard in the twenty-first century. With regional offices in the Middle East, north Africa, central Asia and Europe, IDEA provides a diverse range of educational workshops and summer schools for young people around the world to develop the skills and capacity to engage and advocate for their own rights. Their programmes specifically develop critical thinking, public speaking, cross-cultural competencies and advocacy skills.

Martin Rowson: The "Visual Journalist". Martin's cartoons are a staple of modern British life and appear frequently in The Guardian and The Daily Mirror. He is also a contributor of cartoons to the Tribune, Index on Censorship and the Morning Star.

Kate Evans: 'If you make someone laugh, you're halfway to changing their mind'. Comic book biographer of Rosa Luxemburg aka 'Cartoon Kate' has been a cartoonist and activist for nearly twenty years with a focus on climate change and more recently the Syrian refugee crisis.

Rudy Loewe: Rudy is a visual artist, educator and storyteller who works primarily in comic and zine format, exploring themes such as gender, sexuality, race, trauma and mental health. Rudy is interested in seemingly untold narratives and how these can be given more visibility.

Organisations can book for student groups to attend via Eventbrite. 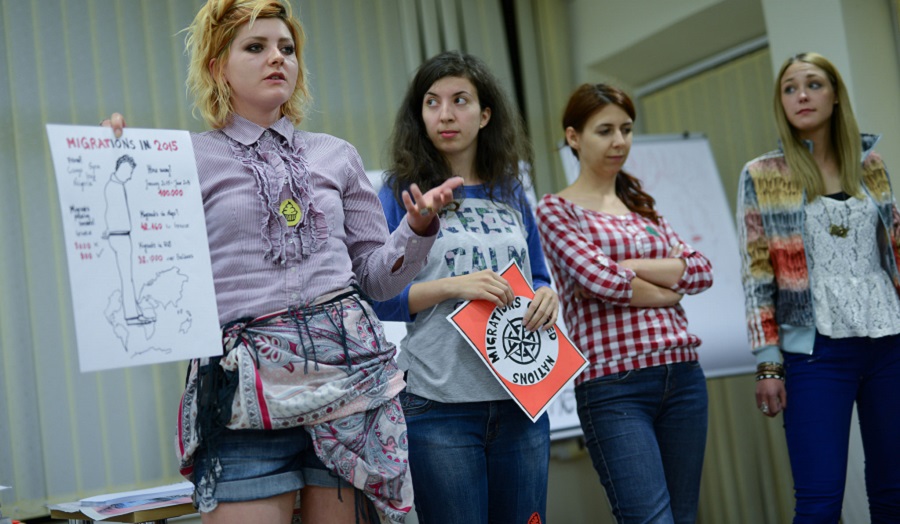