Harry Olmer spoke to International Relations students about his "cut off from civilisation."

Earlier this week London Met’s International Relations students attended a talk by Holocaust survivor Harry Olmer. The talk was arranged in partnership with the Holocaust Educational Trust who aim to educate young people about the Holocaust and raise awareness and understanding.

Born in Sosnowiec, Poland in 1927, Harry recalled his “cut off from civilization” from 1942 to 1945 in a deeply moving talk which gave students a deeper understanding of the events that took place during World War II.

Told to leave everything behind, Harry and his family were expelled from their homes in 1942. Split from his mother, four sisters and one brother, Harry described his fear of uncertainty as he was sent to a concentration camp.

The survivor was kept prisoner at Plaszow concentration camp, infamous for Spielberg’s film Schindler’s List, where he was forced to help make bombs under the German soldier’s authority.

He explained the conditions of the camp as “horrendous”, with many prisoners starving to death surviving on only one small meal every twenty-four hours.

At the time many prisoners were suffering from diseases such as Typhus and with no medications, thousands died slow deaths.

In 1943 Harry was moved to a second camp, where he continued to work in terrible conditions. With no washing facilities and a pile up of dead bodies, he described the camp as "hell on earth."

Forced to work day and night in a factory filling shells with explosives and surviving on a bowl of cabbage soup a day, Harry became extremely ill during his time here.

Liberated by the Russian Army on 8 May 1945, Harry remained in hospital for 6 weeks where he was so weak his body was "in constant spasms."

In July of the same year, Harry, along with 300 boys and girls were sent to England thanks to the Central British Fund and began recuperating his life.

Harry began studying and working in Glasgow and in 1953 graduated from Glasgow University with a degree in dentistry.

He retired in 2013 after five decades at Selbourne Dentist Practice in Baker Street, London.

Students were overwhelmed by his bravery and deeply moving story. One student, Dorcas Yeboah, who recently visited the Holocaust memorial in Berlin said: “It is absolutely horrifying. The way he recalled the smells - I remember reading about it at the memorials. He is an incredibly strong person." 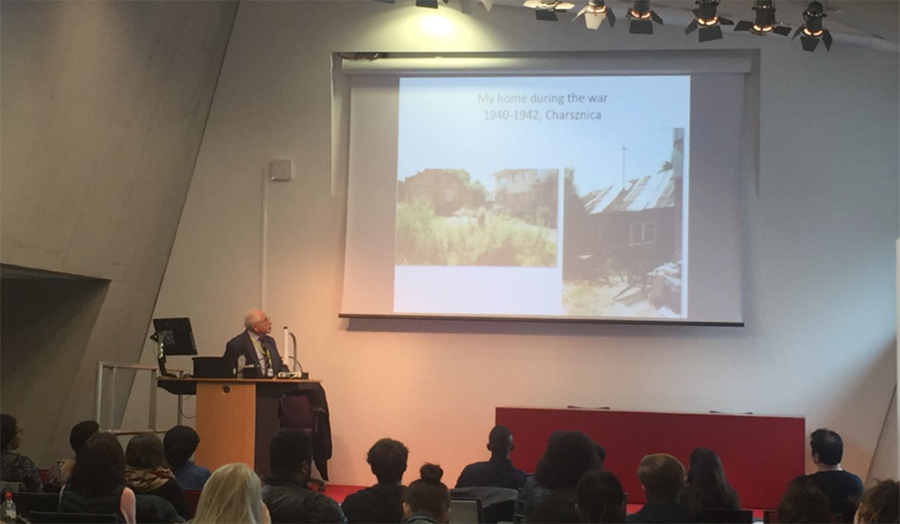