Dorset resident Stephanie Hornett received quite a surprise when researching her great-uncle Reginald, who was killed in World War One.

After learning that Reginald studied at one of London Metropolitan University's predecessor organisations, she contacted the institution in the hope of there being a note or two about him in the University archives.

But when the University wrote back informing her that Reginald is featured in a spectacular stained-glass window commemorating students and staff killed in the conflict, she was absolutely delighted.

“We had no idea that the window existed, let alone that Reginald is named on it,” said Stephanie, who began researching her great uncle as the centenary of the start of the war approaches.

The University invited Stephanie and her mother, Liz Hornett, to visit its Jewry Street campus on 1 May to see the window for themselves.

As well as the stained-glass window, which was installed in 1920, 2nd Lt. Reginald T Salmon is also named in a special Roll of Honour which includes details of his academic studies. He joined the Chemistry department in 1914 and left the following year to enlist in the army.

Reginald served in the Royal Engineers before being commissioned Second Lieutenant in the East Yorkshire Regiment. He was killed at Arras, France, after just twelve days at the front. A minute in the University’s Board of Governors’ record book states that he was killed on 12 May 1917.

“We have Reginald’s diary from the war which he started just before he was posted to France for the third time. The last entry on 7 May reads: ‘To go over top shortly’”, said Stephanie.

“It’s lovely that this beautiful window is here to commemorate him and the other young men who lost their lives. And it’s nice to know that it will be here for years to come.”

Steph’s mother Liz, who lives in Exeter, said she hoped her father Harold – Reginald’s younger brother – knew about the window.

“My father never talked about Reginald; neither my brother nor I remember him being mentioned.

I would like to think that nearly one hundred years ago my father and my grandparents were standing on this very same spot looking at the memorial that the next two generations – myself and my daughter – are admiring today.

“I’m absolutely amazed that a bit of family history has led to this. I had no idea the soldiers were commemorated so well.”

Peter Fisher, Archives Project Manager at London Met, said: “Not a lot of people realise that London Met’s roots actually go back as far as 1848, so we have a lot of history here. The University has many precursor institutions, including the Sir John Cass Technical Institute, which is where Reginald studied.

“The timing of Steph’s enquiry was rather spooky; we had only been researching the names of students killed in the war a week before. It was extremely exciting and hugely satisfying to be able to share the window with Steph and Liz.”

Louise Slater, Archives Project Officer, said: “We were delighted to welcome Steph and Liz to Jewry Street and to have the opportunity to show them the window and other artefacts relating to their story and this period of our history.

“We also presented them with framed photographs of the window and Roll of Honour.” 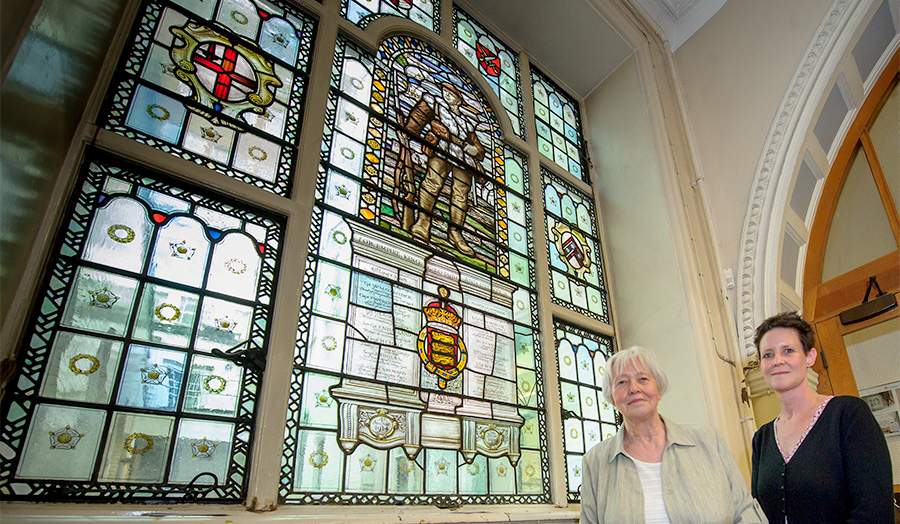