The acclaimed economist and philosopher, Professor Amartya Sen, delivered a lecture titled ‘What is the matter with Europe?’ at London Metropolitan University on Tuesday 9 June.

The room was packed with staff, students and guests including Professor John Raftery, the University’s Vice Chancellor, who introduced Professor Sen as “one of his intellectual heroes”.

Professor Sen is currently a Professor of Economics and Philosophy at Harvard University and has held numerous academic posts at elite universities across the world. He has won many prizes for his contributions to academia, most notably the Nobel Memorial Prize in Economic Sciences in 1998 for his work on welfare economics.

Professor Sen has close personal links with London Met, where in 1985 he established the Eva Colorni Trust in honour of his late wife who taught at the City of London Polytechnic, a predecessor institution of London Met.

In his lecture, Professor Sen described two ‘snakes’ that have impacted upon Europe’s recovery since the crash, the first being the Euro.

The single currency “has removed one of the most important vehicles of adjustment that an economy can use” to restore an economy claimed Professor Sen, who drew parallels with between the Eurozone crisis and Britain’s difficulties with the European Exchange Rate Mechanism (ERM) in the early 1990s.

The second snake, is a failure to recognise the crisis as “the crisis of capitalism in a market economy”, caused by the consequence of the “elimination of various financial controls”, and to instead focus on reducing national debt that rose after governments stimulated their economies in response to the crisis.

History, Professor Sen claimed, appeared to be ignored. It was as though there has been collective “memory loss” of all those involved.

Britain “need not have” pursued austerity and voluntarily jumped into “the belly of the reptile” said Professor Sen.

He contrasted how British national debt as a percentage of GDP was close to 230% when the NHS and the welfare state were founded after the Second World War against a ratio of 70% today.

Since the crisis, although the UK growth rate “shines” against the rates of other European economies its growth rate is “amazingly lower” than Japan, the United States and the emerging and developing economies.

Professor Sen spoke of “a complete failure of the media and public discourse in the country” to put the economic situation into wider perspective.

The Greek economy, which had a growth rate between 3% and 4% until 2008, has now shrunk by a quarter.

Cuts and austerity demanded by creditors has “generated this decline,” Professor Sen declared. “This is the only case I know in which lenders have been lending money on conditions that debtors do certain things that make it impossible for them to pay back the loan.”

Citing Keynesian economic theory, Professor Sen argued stimulating economic growth was the key to enabling Greece to pay its debts. Austerity cuts have taken demand out of the economy and conflated the situation.

Although he admitted Greece needed institutional reform, they did not need austerity. The debate Professor Sen said “has gone completely off the rails… I don’t think the creditors have a clue.”

The modern idea for a united Europe was born out of the bloodiness of the first and second world wars. Those that advocated closer ties between European countries hoped a united Europe would generate good will and reduce animosity between nations, preventing future war.

“Some people say having a unified currency and unified monetary policy is a good first step towards this objective,” said Professor Sen.

However, citing a recent trip to Greece where he found Greeks and Germans expressing little but contempt and negative views each other, he added “anyone that thought that this could be a first step to greater integration need to have their head examined.” 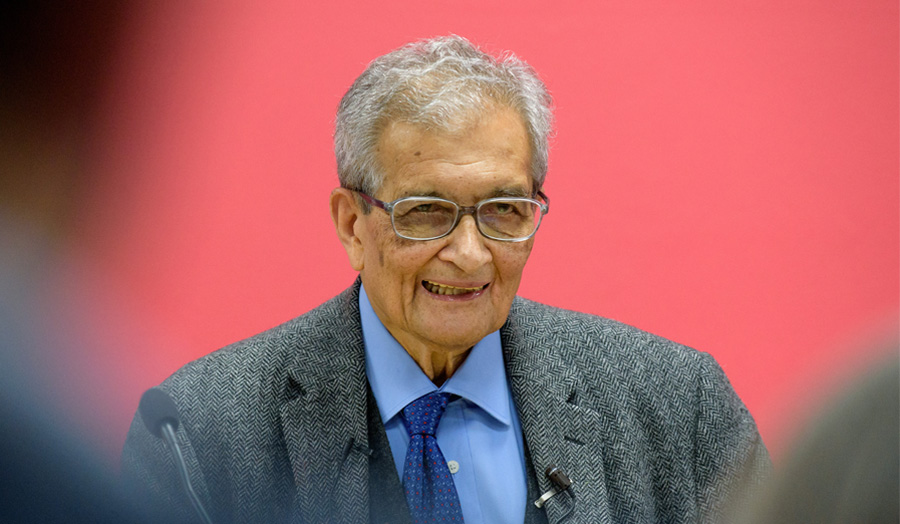