A solar powered energy unit, an ethical retail website and a paper-stretching device for watercolour artists were just some of the entries in this year’s London Met Big Idea Challenge.

Run by the Enterprise unit at London Metropolitan University, the annual business competition invites entrepreneurial students and graduates to identify a problem and solve it with a view to creating a business. Candidates compete through two gruelling rounds until ten entrants reach the final stage - a business pitch to a panel of successful entrepreneurs.

The winners of the Challenge receive access to a prize fund of £30,000 and support from London Met’s business incubator, Accelerator, to help get their enterprises up-and-running.

Entries were up 172% on last year’s competition - something which London Met’s Deputy Chief Executive Paul Bowler attributed to, “an increasing appetite for enterprise across the University.”

The Big Idea Challenge Awards Ceremony was held on Wednesday 7 May at BL-NK, Old Street, where the winners were announced.

“In Italy there is a very different approach to gynaecology than in the UK, and many Italian women feel they need to fly home for appointments,” explained Georgia. “Worryingly, many of them decide to skip appointments altogether, taking a real risk with their health. It’s something that my friends and I saw as a problem and so I started to think about solving it.

“I did some market research and 80% of the women I surveyed said they’d use a service which provides Italian-style gynaecology appointments here in London. And so I developed my business idea, Dottore London, to meet that demand.”

Georgia was delighted to win the top prize and says she will put the money towards securing her new business premises.

“I’m really excited and very happy to win this award! It was a very challenging process which just makes it feel even more special. It’s really motivated me to push on and make Dottore London a success.”

Georgia’s idea was one of many innovative and creative entries to the Big Idea Challenge which showcase London Met students’ ability to think outside the box to solve real world problems.

Graham Ruddick, CEO of social business-to-business company Communitize, headed up the judging panel. He said: “All of the finalists in this year’s competition were very impressive. Their ideas were not just creative and constructive, but credible as well, which is really important. They showed how their businesses were viable and would actually work.

“Georgia stood out because she demonstrated the most direct link between a real problem and a realistic and credible solution. She was very well prepared and addressed every aspect of the competition brief.”

The competition was organised by Simon Boot, Enterprise Manager at London Met. For him, the Big Idea Challenge is a great way to give students the chance to develop their business skills in a supported environment.

“Good businesses often start around problems to solve, and so we thought this was a great angle for a business competition,” he said. “The examples set by our finalists show how it’s totally possible to set up a successful enterprise and that it’s not beyond anyone’s reach. If you have a good idea we can help you turn it into a viable business.”

The competition reflects how enterprise is thriving at London Met, with entries being submitted from all four faculties in the University.

Paul Bowler, the University’s Deputy Chief Executive, said: “The massive increase in participation this year is very encouraging, and ties in very well with the enterprise agenda we have at London Met.

“The candidates have shown great enthusiasm as well as a good deal of innovation. These people may well go on to join Accelerator and develop successful businesses of their own, which is tremendously encouraging.

“Congratulations to everyone involved in this successful competition and very well-organised event.” 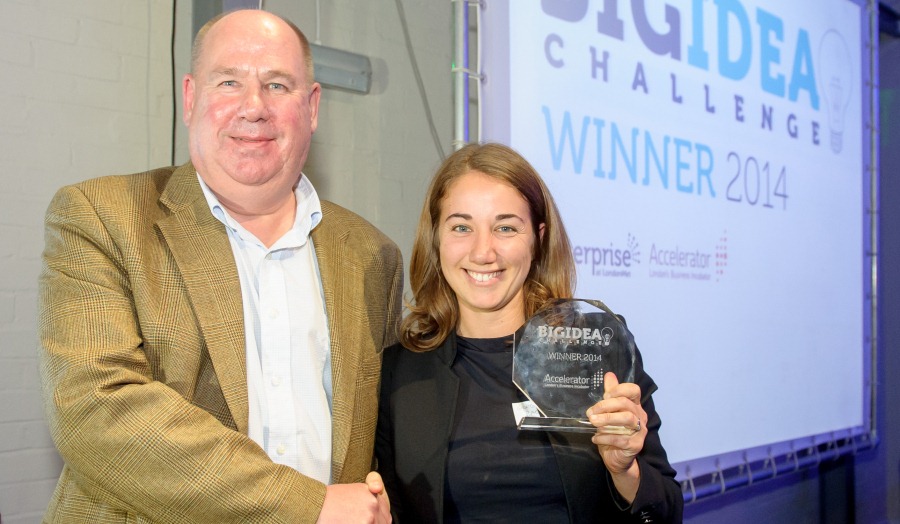