Corina Tuna, a student from Unit 6 of the Professional Diploma in Architecture course at The Cass, has won third prize in the RIBA Journal Eye Line drawing competition, with this her design project Bungamati Studies, Nepal.

The origins of Tuna's design

In November 2015, Corina visited Bungamati in Nepal, a peri-urban village on the outskirts of Kathmandu that had suffered in the area’s devastating earthquake of April 2015. Her aim was to come to an understanding of the physical and sociocultural effects of the event on such communities, and to get an understanding of how they might repair themselves in a safer and more sustainable way. Her work took on board the new subsided topography and the move of the Newari community from destroyed homes to the forest fringes in temporary accommodation on reclaimed common land. She also considered the idea of building new homes using courtyard forms on the perennial terraces, where grey water would be treated to ensure clean run off to the village stream.

Praise from the judges

Now in it's fourth year, the RIBA Journal Eye Line drawing competition sponsored by AVR attracted over 200 entries from around the world.
The competition judges included Will Alsop, Jes Fernie, Amelia Hunter, Eric Parry, Joe Robson of sponsor AVR and Hugh Pearman of RIBA Journal. They were all impressed by Tuna's, "very acute first hand observation coming together with a propositional sensibility to create understated drawings loaded with information and potential". Every judge agreed that Tuna’s measured work on post-disaster reconstruction was, "a good antidote to the abstraction of some of the [other competition] submissions".

You can read the full story about Tuna's project including the judges individual comments on the RIBA Journal website. 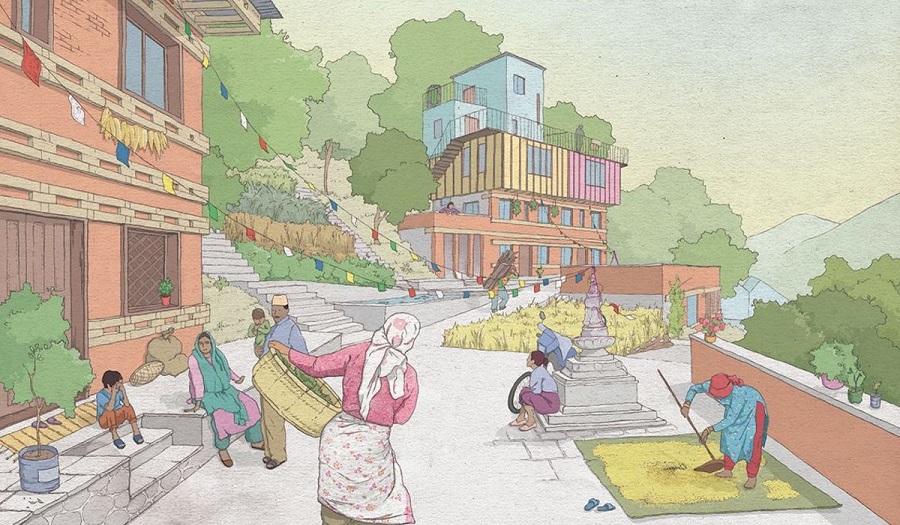