Celebrating the heritage of the Irish in Britain News

The digitisation of the Archive of the Irish in Britain offers remarkable insights into the lives of Irish people who forged new lives in the UK.

Millions of residents of Great Britain are either Irish or have Irish ancestry – it’s estimated that as around 10% of the UK population have at least one Irish grandparent.

The history of this migration, and the lives of the Irish people who forged new lives in the UK, is recorded in the Archive of the Irish in Britain – a large portion of which has recently been digitised.

The AIB began life in Kilburn, North London in 1984 as a project for Irish migrants to record their histories through a small repository of documents, photographs and oral history recordings. It was then held by the Irish in Britain History Group, a community organisation established a few years earlier, before moving to London Metropolitan University (then the Polytechnic of North London) in 1989.

The AIB today comprises thousands of documents, photographs, books, videos and audio recordings, along with a number of ephemera collections, and covers a wide variety of subjects across three broad categories of welfare, politics and culture.

The digitisation of the AIB comes thanks to funding from the Irish Government’s Emigrant Support Fund. The digitised collection was formally launched at an event in London on 9 March, with speakers including Adrian O'Neill, Irish Ambassador to the UK and Stephen McGann, actor and author, who gave a powerful speech about poverty among Irish migrants and how history should give voice to the voiceless.

Dr Tony Murray, Curator of the AIB, said: “The purpose of digitisation has been to ensure that records of the Irish in Britain are preserved for posterity and disseminated, as widely as possible, for the benefit of current and future generations of Irish people at home and abroad.

“The digitisation of the Archive of the Irish in Britain will further inform and deepen understanding of the Irish diaspora. In so doing, it will continue to contribute to the strengthening of Irish-British relations in years to come.”

Adrian O'Neill, Irish Ambassador to the UK, attended the launch. He said: "The archive is the preeminent collection of material on the Irish community in Britain. It is both an academic resource and a place where that community can come to learn of its own history. Its material mainly covers the mid-to-late 20th century, though there is also some material dating back to the late 19th century and – most important - new material continues to be added.

"I would like to thank Metropolitan University and all of those involved both in preserving the archive over the years and now extending its reach through this fantastic digitisation project. This archive will be a wonderful resource for the community here for many years to come."

The contents of the Archive are now visible through its website for everyone, including those hitherto prevented from accessing them due to geographical distance or impaired mobility. 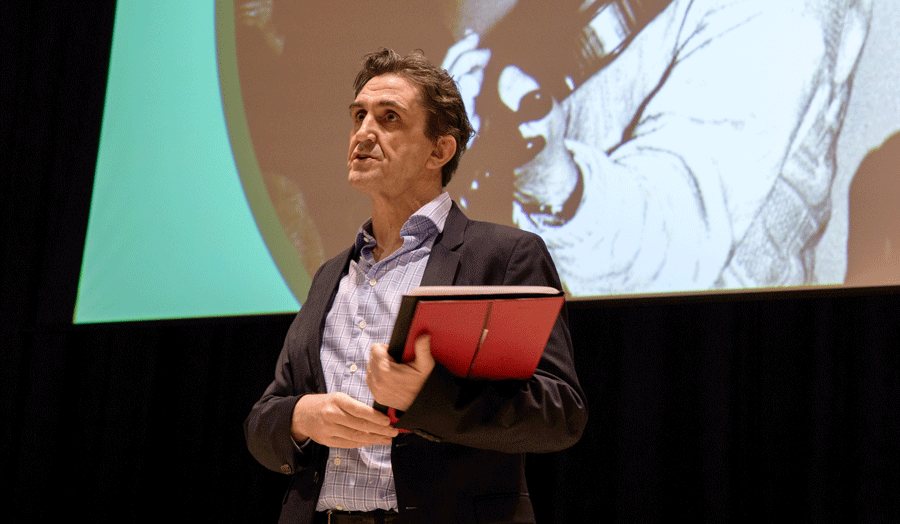 Actor and author Stephen McGann speaking at the launch of the digitised archive.