Cass graduate David Tovey discusses his remarkable life and his latest projects in the week his artwork is featured on the royal wedding edition of The Big Issue magazine.

When David Tovey arrived for the first day of his foundation course (extended degree art media and design) at London Met in 2012 he felt as though he didn’t belong. “I was in a classroom session and I was like ‘what am I doing here? I’m not an artist,’” he recalls.

Fast forward six years and David has defied that self-doubt and is enjoying a varied career as a celebrated photographer, painter, installation artist and performance-maker. His latest project, the cover page art work for the royal wedding edition of The Big Issue magazine, was unveiled earlier this week.

But it hasn’t always been an easy path. “Quite soon after the course began I started to get extremely ill. My cancer had returned and my mental health started to suffer,” He said.

Despite these huge challenges David managed to finish the course thanks, in part, to the support of the ‘phenomenal’ teaching staff at London Met’s Sir John Cass School of Art, Architecture and Design. However, soon after completing his foundation year he hit his lowest point.

“Just over a month after the course finished I took a fatal overdose and was resuscitated in a park in London,” he recalls. “I lost my home and then ended up living in my car.”

As is often the case, David’s path to rehabilitation from addiction has been tough and he still has to manage chronic physical and mental health issues, but despite these challenges he’s managed to rebuild his life.

“Some good things have been happening to me in recent years,” he said. “Amongst other things, I’ve had a show at the Tate Modern and Tate Liverpool, I’ve also had several solo photographic exhibitions.”

David credits his time at London Met as being one of the keys to his current success: “I loved my foundation course at London Met, I made some good friends and the teachers helped me realise my true potential.”

That potential will continue to be realised in style as David takes on some new projects later this year, “I’m currently writing and composing an opera for the International Arts and Homelessness summit festival in Manchester. I’m also recording a BBC Radio 4 documentary about my art and my work in the outsider arts. So yeah, pretty busy!”

You can buy prints, mugs and tea towels of David’s art work for Royal Wedding Collection on The Big Issue’s website – all sales support the Big Issue’s mission to dismantle poverty through social trading. 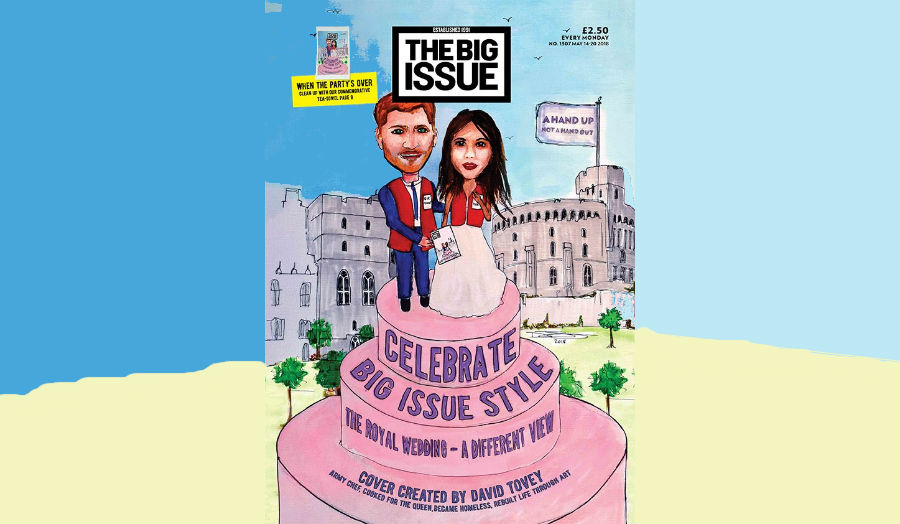