Cass alumna contributes to artistic exploration in public life News from the School of Art, Architecture and Design

MArch alumna Jess Philips a piece exploring the Becontree Estate for ‘We’ve Got This: ethics, public service and art’

The work of London Met alumna Jess Philips has been included in a new publication exploring ethics in public life. We’ve Got This: ethics, public service and art is an innovative mixed-media art exhibition that connects council chief executives with artists from across the country.

Jess, who studied MArch at The Cass, was commissioned by Chris Naylor, Chief Executive of the London Borough of Barking and Dagenham, to produce a piece that represented his passion for transforming the lives of individuals by ‘taming’ collective anger with ‘hope, by faith and love, and fellowship, and beauty’.

Responding to the Nolan Principles

The collaborative artworks are responses to the Nolan Principles - the seven principles of public life first set out by Lord Nolan in 1995 and included in the Ministerial code to this day. The seven principles apply to everyone who works in the public sector, from a front line social worker, to a chief executive or councillor to the Prime Minister himself. The project reimagines these principles, putting them in a contemporary context.

Dawn Reeves, Curator said: "Every artist and commissioner approached their brief in a different way and with different things they wanted to say about the ethics. But clear and common themes have emerged - a golden thread that could lead to the evolution of a new way. The collaborations reveal the fundamental humanity of public servants. The works show why they do what they do. The public service spirit illustrated has the power to build trust and confidence in public institutions – and we’ve never needed this more. Our colleagues and our communities need to be reminded that from a strong ethical core we gain resilience."

We’ve Got This takes a fresh look at ethics: re-inventing the Nolan principles in public life through a cutting-edge cross-disciplinary art exhibition. The project aims to make sense of the challenging contemporary context, as well as celebrating the good stuff at the heart of public service. The exhibition will be presented at the 2019 Solace Summit in Birmingham 16 - 18 October, with plans for it to tour in 2020.

About the Becontree Estate piece - by Jess Philips*

The piece focuses on the Becontree Estate with the centrepiece of the drawing examining and showcasing the tremendous White House, an 18th-century farmhouse brought back to life as a pioneering public space for art and social activity. The house embodies strength and fellowship, and a faith in local communities that is often overlooked and undervalued. The estate itself provided an escape from overcrowded slums, homes for WW1 heroes, Ford workers and a place to grow fruit and veg. The detail in my work shows a different perception of the East End, one where everyone can make history.

The drawing nods to the original intentions of the Becontree estate which offered homes for heroes of the first world war and jobs, often at the local Ford factory or in the city. It was a haven for people escaping the overcrowded slums of London, giving them a place to grow their own fruit and vegetables. I included the WW1 soldier, the White House gardener, artists and volunteers at the White House and historical female figures such as a midwife, suffragette, an abbess of Barking Abbey, Jo Richardson, Labour politician, Elizabeth Fry, the prison reformer and Edith Cavell. The detail in my work shows a different perception of the East End, one where everyone can make history.

*Originally published in ‘We’ve Got This: ethics, public service and art’ 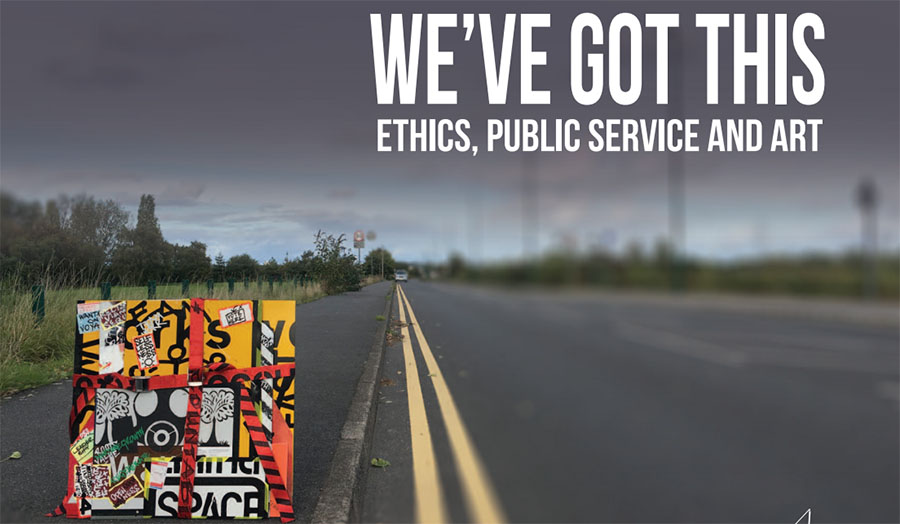