Brexit: Have we shrunk your world News

Journalists and a Haringey Councillor come together to discuss what will happen after Brexit.

Brexit: Have we shrunk your world? That was the theme of London Metropolitan University’s debate on Tuesday 5 March, discussing how Brexit has affected people around the country and beyond – and how it may continue to do so in the near future.

Most Britons hear the word “Brexit” several times a day. It is splashed all over newspapers and news channels, the primary subject of countless conversations between friends and colleagues. The panel invited to the event, made up of five distinguished guests, answered questions from students and the general public, expressing concerns in particular over what a no-deal Brexit could mean.

The event was part of London Met Journalism’s Newsweek, where students produced magazines, online stories, and television and radio programmes. They reported on the event, conducted interviews, created posts for social media, filmed the debate and produced a live blog.

The panel consisted of:

Barry was asked if all Americans now think Brits are crazy. “Yes, crazy. Yes, we are too. It’s as if two democratic systems are having a stroke simultaneously,” she said. To vote for Brexit without knowing what it would look like was a “paralysis waiting to happen”, she added.

Brexit concerns members of the population who are not born in Britain. Jogee was asked: “About 42,000 people in Haringey are from other countries. How can you ensure they will get the best possible deal?”

“Nobody knows what is going on but we need to provide support”, Jogee said. “What’s really important is that we cherish the values of solidarity and togetherness and, more widely, the city that we grew up in.”

Post-Brexit Britain concerned one audience member. “What’s the best solution to the Brexit deal at this point? A second referendum?” they asked. Barry said a second referendum would have a “lasting and damaging effect” and would be a “defeat of that part of the country, the people who voted out”.

Osbourne said: “I have a terrible feeling that if we have a second referendum, the divisions we have now would end up deeper than they are.” He added: “The fact that you can go out and find a whole community that believed that a no-deal Brexit wouldn’t cause any problems is very worrisome.”

Jogee, who is a “huge supporter” of Jeremy Corbyn, was the only panelist with opposing views on the topic, saying, “as a political class, we should show some courage and come out and say we shouldn’t support something we know will make people worse off.”

Although an uncomfortable subject, racism was a topic that could not be avoided. Sarkar was asked if Britain is at risk of civil war - a prediction made by UKIP. She said no; that the influence of the Far Right here was not on the same scale as Germany and Finland. “But there is a growing risk of isolated acts of Far Right terrorism and violence.”

The fear of a no-deal Brexit – and a possible post-apocalyptic Britain – prompted host Simon Cadman, Senior Lecturer in Journalism, to shift towards a more positive end.  “Do you think we all need to stock up on foodstuffs such as baked beans?” he asked.

Osbourne was emphatic: he recommended buying only Branston. “It doesn’t take much for the supply chain to choke up. My concern is our capacity for panicking.” Jogee said: “I feel food shortages are going to be dangerous and have a massive impact on people’s lives.” 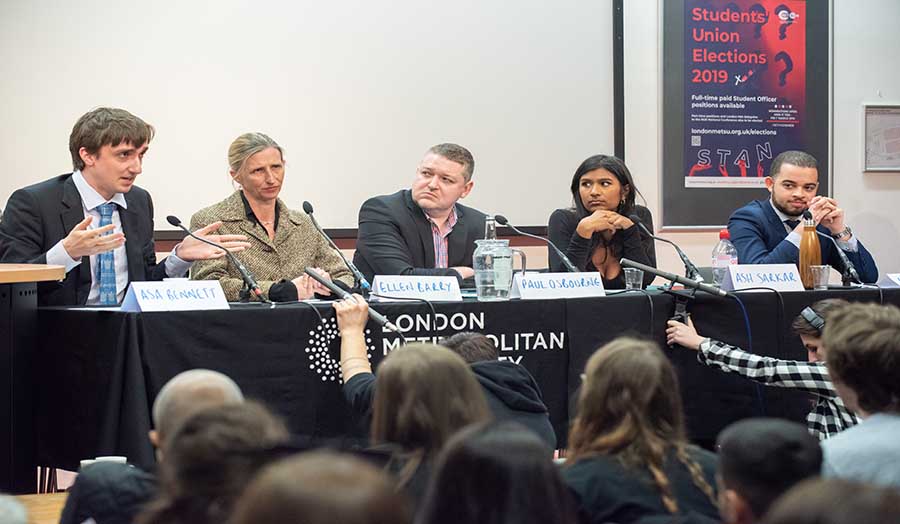