Film and Television BA students at London Metropolitan University had a special opportunity to learn from multi-BAFTA award winning television director and producer Geoff Posner, in a workshop that centered on dramatic blocking for the camera.

Dramatic blocking is one of the most important elements in the visual medium – making it one of the hardest to put into practice. Mary Mullen, module leader and lecturer in Film and Television studies, organised the event. As a production practitioner, Mary has worked with Geoff on a number of different production events and educational workshops.

In preparation for the workshop, the students were set a script writing challenge, where the winning script would be filmed and directed by Geoff in the workshop, whilst also being performed by two professional’s actors.

All students sent in their first script, which then received notes from Geoff and Mary. After the feedback, the students sent in another, more refined script, out of which the winner was chosen, including two runners up.

Mary Mullen said; ‘Geoff and I evolved the script competition in January 2019. This was an additional task for the students. What surprised me was both the take up, resulting in 12 scripts, and the developing industry connection between Geoff and the individual students in the process of receiving and responding to Geoff’s script notes with revisions over the course of the four weeks.

‘This creative script-to-screen process enabled all participants - the students, actors, Geoff and myself - to engage in a creative developmental journey. As part of my practice and professional development, I format workshops for the students with a collaborative ‘live’ industry brief, as a pedagogic tool for learning and engagement. Preparation for industry employment is a key element of my teaching philosophy.’

At the workshop, the actors performed the winning script, Ephermeral, with Geoff directing. The students, including a film crew and a small audience, watched a live feed of the performance on monitors, filmed by London Met students. This was done to create a professional working environment for the students, and to ensure they understood how dramatic blocking translates onto the screen.

It is clear from the feedback given to Mary that the students thoroughly enjoyed and learned a lot from the workshop. One student said; ‘It was incredible - definitely one of the best workshops that I have been to.

‘It brought everything I have learned on my course in the last three years at London Metropolitan University together. I feel confident now of leaving university with a professional understanding of the craft.’

Sandra Denicke, Deputy Head of Architecture at London Met and Mary’s HEA mentor, said; ‘As Mary Mullen’s HEA mentor, this workshop illustrates a great example of vertical studio learning. This form of interactive pedagogy encourages students to work with their peers across the degree, thinking on their feet to produce and craft a piece of creative work.’

The University now has a professional short film, directed by a BAFTA winning director and written by a London Metropolitan student. The film is currently being edited and used in colour grading workshops for the Film and TV students. 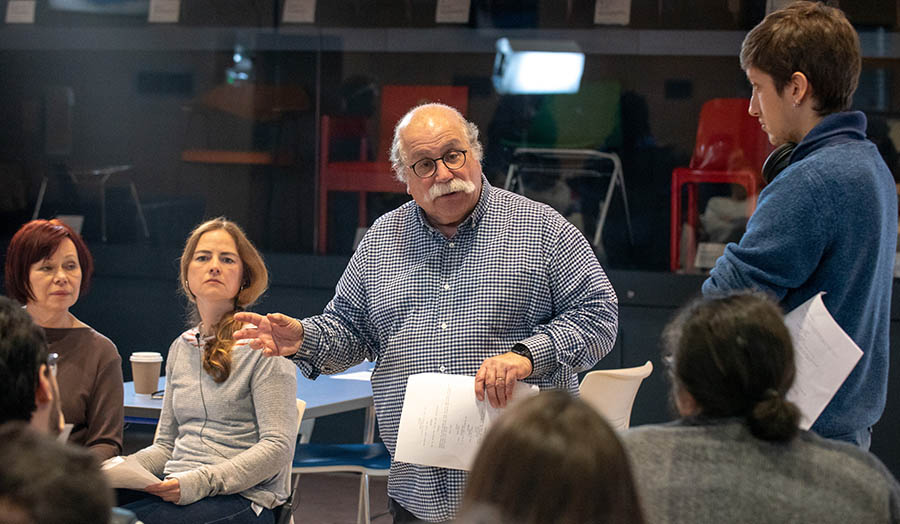