BA Fashion students prepare for Project Red 2018 News from the School of Art, Architecture and Design

Fashion students at the Cass have been gearing up for the annual PROJECT RED fashion show.

Students studying on the BA (Hons) Fashion course at The Cass have been busily preparing for the annual live catwalk show, PROJECT RED, which takes place in the Atrium at Goulston Street on Friday 23 February.

The show, which marks the end to this year's Celebration Week at The Cass, features work from first year students on The Cass BA (Hons) Fashion degree and will be followed by a drinks reception with staff and students.

The students taking part in PROJECT RED 2018 once again took their inspiration from the red feather used to represent Sir John Cass, the philanthropist after whom the School is named. "According to some, Sir John Cass died suddenly in the middle of signing his will by which his Foundation is still endowed and those present at Founder’s Day honour him by wearing a red feather, which has come to represent the blood-stained quill he was using at the time."

Using the red feather and the story of Sir John Cass as a starting point, students were asked to design a collection of 10 red outfits exploring what red means to them - then choose one to create for the catwalk show.

You can see a video of 2017's PROJECT RED show on YouTube - Undergraduate Film and Photography students from the School will again take the opportunity to record the show for their portfolios.

If you are a teacher or lecturer who would like to arrange a group booking for your school or college students, please contact Suman Uddin at s.uddin@londonmet.ac.uk. 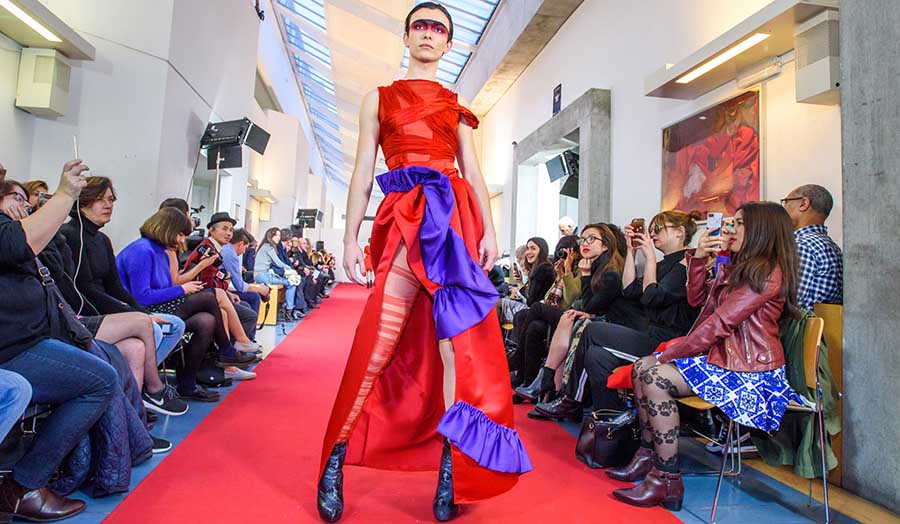