Architects with Cass connections wins competition to remasterplan one of Russia’s oldest cities. News from the School of Art, Architecture and Design

The Novaya Zemlya consortium saw off competition from around the globe thanks to their ‘human-centred’ plans to create a compact city.

Mae Architects, who lead postgraduate architecture Unit 5 (Architecture RIBA 2 MArch course) at The Cass, are part of an international team that has won a contest to ‘remasterplan’ Russia’s oldest city Derbent in Dagestan.

The competition was launched as part of a wider program to develop Derbent. The ‘remasterplan’ will be an important document, which will determine the direction of socio-economic and geographical development of Derbent in the medium term. Its implementation will support Derbent’s internal transformation, the integration of the town with global processes, and an improvement in the efficiency of the use of the town’s resources.

Speaking to the Architect’s Journal, Mae founding director Alex Ely said: ’We are flattered to have the opportunity to plan the future of Dagestan and respond to this significant UNESCO world heritage site. It’s great that our team has been selected from 144 applications from 31 countries.

‘Our winning strategy is aimed at building in resilience; addressing a lack of housing, education and cultural infrastructure and creating economic opportunity. We have developed a forward-looking vision for Derbent which respects the unique identity and qualities of the city.’

The judges praised the Novaya Zemlya team’s plan to create a human-centred ‘compact city’ with landscaped streets with an embankment as the city’s main community space. They appreciated the project’s goal of highlighting Derbent’s position on a ‘cultural crossroads, where its ancient past meets its future.’

The call for concepts – backed by the I Love Derbent Charity Fund and the Government of the Republic of Dagestan. Finalists each received 2.5 million rubles (£31,000) to draw up conceptual proposals during the competition’s second round. The winning team will receive 4 million rubles (£50,000).

Judges included Vladimir Vasiliev, head of the Republic of Dagestan; Irina Zamotina, chief architect of the Urbanika Institute; Isa Magomedov, chief architect of Derbent Town District; and Evgeniya Murinets, adviser to the president of the Union of Architects of Russia.

It’s been a great year for Mae who were also shortlisted for the inaugural RIBA Neave Brown award. 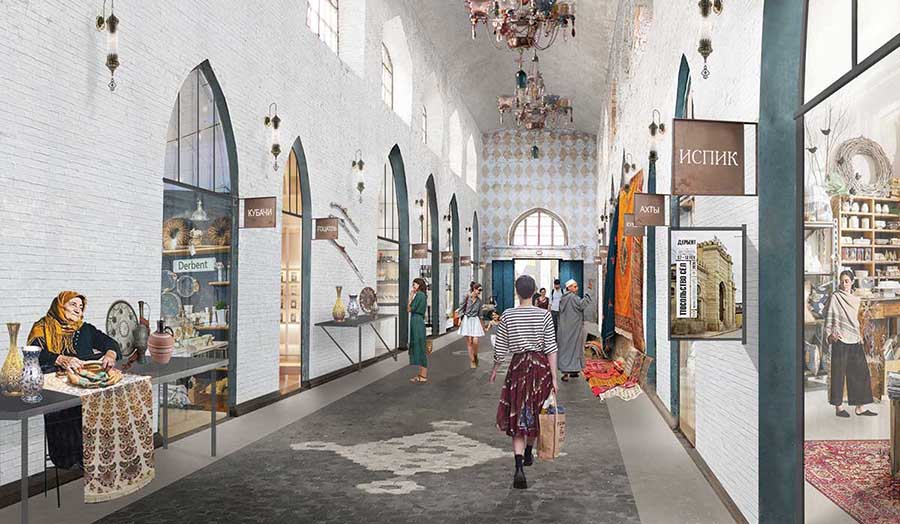