How psychology can explain the paranormal

On 27 May 2015 London Metropolitan University’s School of Psychology welcomed Anomalistic Psychologist Professor Chris French to present his study of the paranormal.

Professor French introduced anomalistic psychology to an audience of London Met staff, students and external guests, as “the study of extraordinary phenomena of behaviour and experience, including (but not restricted to) those which are often labelled "paranormal".
“It is directed towards understanding bizarre experiences that many people have without assuming that there is anything paranormal involved.”

Professor French opened the talk with a few tests, attempting to ‘telepathically’ communicate a number to the audience, firstly between 1 and 10 and secondly between 1 and 50.

The results showed the majority of people chose the number 7 in the first test, and the number 37 in the second test. Professor French explained that these results show a predictable response based on human conditioning and not telepathic communication.

People often describe coincidences as evidence of psychic ability; having a dream which then appears to come true, thinking of an old friend who then immediately rings you.

Professor French explains these ‘psychic premonitions’ through cognitive bias. “In all likelihood these instances are simply coincidence,” Professor French said. “For every one time this has happened there are hundreds of times when your dreams have no relevance to life events or you have thought of a friend or family member who has not telephoned you. These times go unnoticed.”

As humans we are conditioned into systematic biases in the way we process information, meaning that we are likely to attempt to recognise patterns where none exist.

This type of cognitive programming explains Pareidolia, the phenomenon of seeing faces in patterns, clouds and random marks, for example, seeing a face in the moon, and hearing messages in random noise, such as ‘satanic messages’ hidden in music only audible when played backwards.

To test his theories Professor French continues to conduct experiments, all of which have returned positive results for the sceptic community.

To investigate if psychic ability was real he asked two professional psychics to perform five psychic readings each. The subjects for the readings were all female, between the ages of 18-30. Each subject was asked to sit quietly behind a screen while the psychics performed their reading and recorded their findings on paper.

Afterwards, each subject was asked to read all the descriptions and select the one they felt was theirs. One of the psychics was able to accurately describe just one subject, the other psychic achieved no correct descriptions.

Professor French believes that people’s trust in psychic readings can be explained by the Barnum Effect, the tendency that people have to accept vague and general statements as being descriptive of their own unique personalities.

An example of this is: “At times you are extroverted, affable, and sociable, while at other times you are introverted, wary, and reserved.” Another favourite, Professor French said, was: “I’m seeing an unfinished book.” This can of course refer to someone writing a book – almost guaranteed to be unfinished – or reading a book, something which lots of people do.

Statements like this are used in psychic readings and popular horoscopes.

Professor French spoke in depth about the physiological phenomenon of sleep paralysis, a common experience occurring when a person is falling into or waking from REM sleep. The defining symptom is an inability to move but can be accompanied by hallucinations, panic and temperature fluctuations.

Sleep paralysis has been described in different ways across cultures and eras, as ‘The Old Hag’ in Newfoundland and ‘Kanashibari’ in Japan. It can also explain the experience of claimed Alien Abduction.

Professor French also highlighted how belief systems have changed over the years. In the early 1900s, much of the western world believed in fairies. In the late 1800s, sleep paralysis was explained through the presence of an Incubus or a Succubus. These beliefs have now been replaced, either by scientific findings, or with alternate paranormal explanation such as Alien Abduction.

Professor French’s findings suggest that there are certain personality traits which suggest a greater susceptibility to paranormal beliefs. If people will succumb to hypnosis, memory conformity, fantasy proneness and disassociativity they will be more likely to explain coincidental occurrences or frightening experiences as psychic or paranormal.

Professor Chris French is the Head of the Anomalistic Psychology Research Unit in the Psychology Department at Goldsmiths, University of London. He is a Fellow of the British Psychological Society and of the Committee for Skeptical Inquiry, as well as being a Patron of the British Humanist Association and a member of the Scientific and Professional Advisory Board of the British False Memory Society. His main area of research is the psychology of paranormal beliefs and anomalous experiences. He was editor of The Skeptic magazine which, for more than a decade.

The event, organised by Dr Kostas Papageorgiou, lecturer in Developmental Psychology, was the last in a series of talks hosted by London Met’s School of Psychology for this academic year. 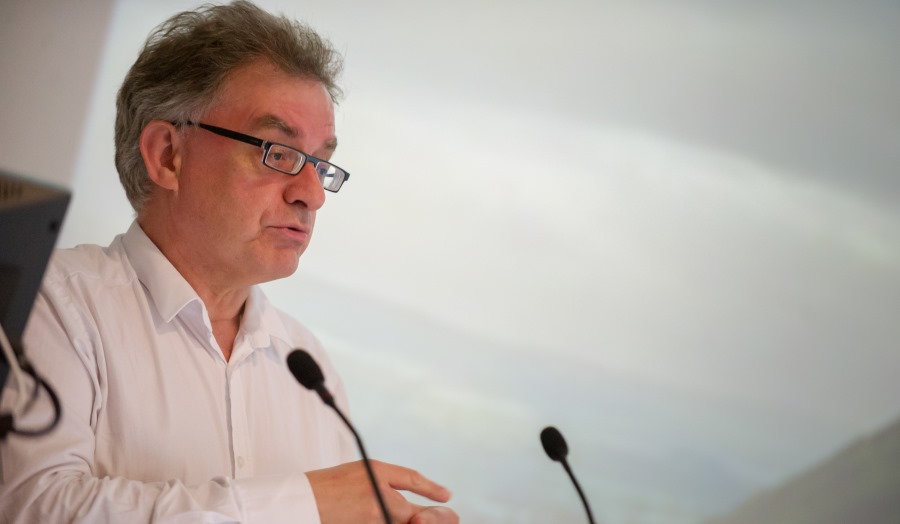