London Met welcomed two former US Congresspeople to speak about their experience of working in Congress, as well as Donald Trump and the 2020 Elections.

Two former US Congresspeople visited London Metropolitan University on Monday 9 March to offer a unique insight into their experience of American politics.

Elizabeth Esty (Democrat – Connecticut, 2013-19) and Donna Edwards (Republican – Florida, 2011-2017) discussed Donald Trump’s presidency and the upcoming 2020 US elections, whilst also touching on their own experiences in Congress.

There were over 100 London Met students and staff, as well as students from the University’s partner schools, City and Islington College, Leyton Sixth Form, Ealing and West London College and North Herts College, who joined the event as part of a widening access initiative.

Elizabeth Esty began by saying how she “wonders how coronavirus will play into the upcoming elections.” She believes that it will “create chaos that plays into Donald Trump’s favour for reelection,” and that at the moment, “there is mass unrest and political disparity around the world.”

Jeff Miller agreed with Esty,  saying that “each political party - Republican and Democrat - is being pulled apart and taken to places they are not comfortable with.”

All those who attended had the opportunity to pose a question to the congresspeople. One student asked how Donald Trump’s actions and controversies have changed the presidency. Miller responded by saying: “We will only know how much he has changed the presidency when a new president takes over.”

Another student asked the difficult question of what to make of the Iranian major general, Qasem Soleimani’s assassination in January. Miller answered first, having worked for a number of years in Iraq for the US government. He said that “the US has always tried to instil democracy within Iraq”, and that the decision to assassinate Soleimani was “the appropriate decision.”

Esty completely disagreed, saying, “it is a huge problem for a president to assassinate foreign political members of a sovereign state. This kind of behaviour sets a dangerous precedent, and it jeopardises soldiers in foreign countries.”

Dr Cara Rodway, Deputy Head of Eccles Centre for American Studies, was also in attendance at the event. The Eccles Centre plays an important role in organising Congress to Campus, as the Congresspeople will go on to visit and speak at other universities around the country.

Cara said: “Congress to Campus encourages young people to take an interest in politics, while also giving them a deep understanding of American politics from people who have real, lived experience. This understanding is made all the more important with Brexit and the special relationship our Government seems likely to engage in with the US.

“London Met is one of our favourite places to hold the event. The students are always so engaged and ask the former Congresspeople questions that really get the best out of them.” 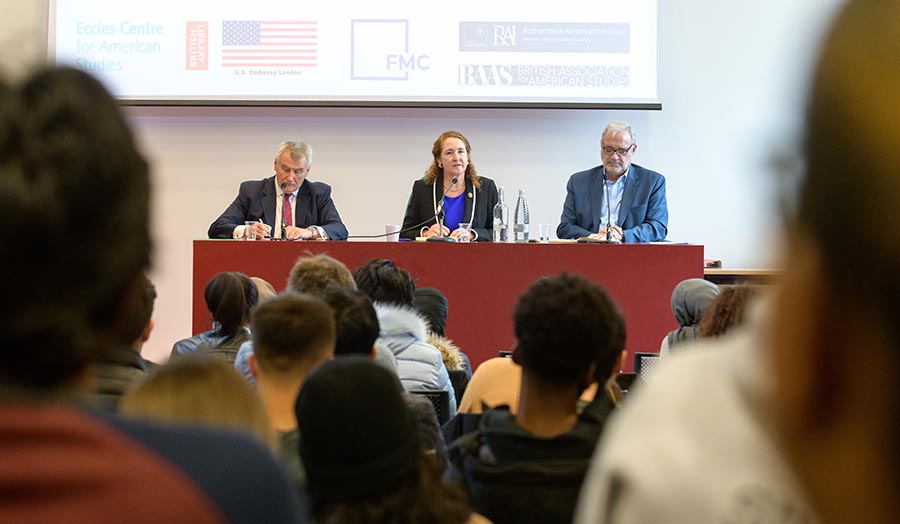