A vision of London from the future News from the School of Art, Architecture and Design

Postcards from a visitor in London in 2041 give today's  hope for a greener, wilder capital.

A series of inspiring postcards, written from the perspective of a Londoner 20 years in the future, have been developed as part of a London Metropolitan University project to inspire citizens of today, and help us all believe that London can once again be a safe haven for wildlife.

The 'London: Urban Jungle' project, was developed by London Met lecturer Sian Moxon, with funding from the Massachusetts Institute of Technology (MIT),  and imagines the possibilities for the city to be transformed through rewilding.

The vibrant and thought-provoking postcards depict five key public spaces in the capital - a retail plot, a square, a residential street, the Green Belt and roadways - transformed to benefit wildlife and people, as well as illustrating how they could contribute to a habitat network across the wider South-East region.

Through the postcards addressed to today's Londoners, new visions of the city are explored from the perspective of a visitor twenty years in the future, highlighting the possibilities that urban regeneration focused on promoting nature could bring.

I'm visiting our city in the future: a haven for nature + people. City retail + office plots, emptied by increased home-working, are now pocket parks lined with green walls, buzzing with bees. Concrete squares have become tiny forests, bringing shade from our hotter climate + sheltering red squirrels. Wild play streets have replaced suburban car parking, so kids can discover storks + other fauna on their doorstep. On the Wild Belt trail that now encircles the city, I spotted wolf + lynx from its habitat towers. Now I'm inspired to explore the wider region, with its landscape shaped by beavers to control flooding. I'll take the slow ways for pedestrians, cyclists, canoeists + wildlife that connect the city to the even wilder landscapes beyond.

Wish you were here! xx"

Moxon is the founder of urban rewilding campaign, Rewild My Street. She explains, "When we talk about the environment, there is often a sense of hopelessness and fear. I wanted to show that there is good reason to be hopeful.

"The changes needed to make London a safe haven for wildlife are in our grasp now. Rewilding would not only help different species, but would also effectively regulate our urban environment, helping to reduce things like flood risk and overheating that are going to be increasingly problematic with climate change.

"There need not be conflict between rewilding and serving the needs of the city's people. In fact, contact with nature and green space dramatically improves our health and wellbeing in terms of both physical and mental health.”

Rewild My Street seeks to help urban residents to adapt their homes, gardens, and streets for wildlife. Based around a campaign and a website that uses architectural drawings to show a vision of how a typical London terraced street could be transformed for the benefits of both wildlife and people. It shows different views of this street, reimagined as a green, vibrant environment, with a diverse range of species that are known to be attracted to urban gardens to inspire people with an aspirational vision of how their street could look.

The postcard was funded through the project's success in the Massachusetts Institute of Technology (MIT) Post-Covid-19 City Challenge, which its lead, senior lecturer Sian Moxon, won last year. The featured images were created by Sian and the postcard was designed with the help of Nadia Mokadem, a graduate of London Met's Illustration BA programme, who was employed as a graphic design assistant on the project.

It was launched at a talk exploring Urban Nature in London Met's Ecological Dialogues series and will be presented at the international Nature of Cities Festival. It was sent as a Christmas card to subscribers of Rewild My Street, a project run by Sian to provide urban residents with tips and ideas to rewild their gardens, streets and wider communities. 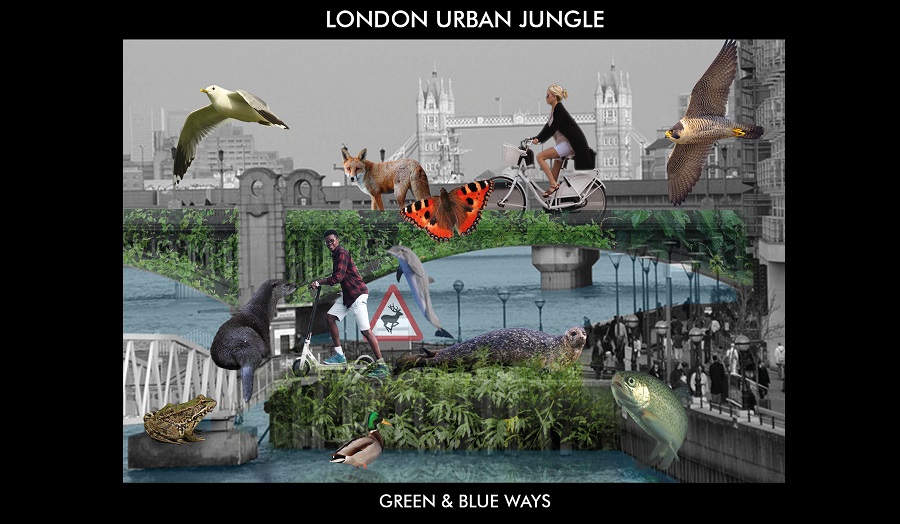