A Day of Making overview News

Industry experts joined Cass staff and students in a series of amazing lectures on the skill of making.

On 18 November Cass Interiors presented an inspirational series of lectures looking at the future of design and the importance of model making.

Four guests joined staff and students to present lectures on 3D printing, model making, the importance of making to the design process and sources of inspiration.

The day was organised and introduced by Henry Landon, a lecturer in Interior Architecture at London Met, Henry was on hand to introduce the speakers as well as the ‘table of intrigue’ which held several examples of models at various different stages of development, made from different materials which the audience were encouraged to come and inspect.

Simon Hamnell from Millenium Models was the first to speak, being introduced by Henry as a ‘true maker’. Simon delivered an insightful speech about the intricacies of modelling, the parallels between model making and building structures and the process of making.

“All buildings are just a series of parts” Simon explained, “the first rule is ‘don’t panic’, you can always get from a to b, then from b to c.

Simon presented three projects he had worked on - a display model of the Mebe Plaza in Moscow, an interior structure to hold the Waddeson Bequest Collection at the British Museum and finally the newly constructed ticket hall at Kings Cross. Over the course of 10 years Simon was tasked with creating models of the curved and strutted dome which tops the ticket hall, “what you will find” Simon said “is that a model will support itself in exactly the same way a structure does.”

Simon was followed by Mark Lim, founder of Chalk Studios, who took students through his own influential educational experience and on a journey through the possibilities in 3D printing.

Mark began his career studying Product Design but after a year on this course he switched to model making as he wanted to study something more practical. It was on this course that he encountered a lecturer who presented students with the statement “your industry will not exist in 10-20 years”.

This warning lesson proved to be instrumental for Mark and his contemporaries who were spurred on to explore the technological advances that could either endanger or enhance the industry.

Mark discussed various advances in 3D printing and highlighted projects Chalk Studios had embarked upon. One example was the development of a flexible helmet to improve results from MEG brain scans with the Wellcome Trust.

Mark referred to new developments in 3D printing like ‘memory metal’, which reforms back to its original printed shape when heat or electricity is applied.

Owen Rutter, a model maker with over 10 years of experience opened his talk with advice to students, “always put yourself in a position where you can learn the most.”

Owen described how he accidently bumped into the managing director of Aerotrope, the international aerodynamic and structural engineering firm, in a climbing shop and how this ultimately led to his job with the firm and three years working on the high profile Gardens by the Bay project in Singapore.

Owen described the project’s ‘top down’ design process, the design followed a government decision to create a tourist destination. He juxtaposed this with a ‘bottom up’ approach when he and some friends decided to build a roundhouse from natural materials in Wales and began building the structure, designing as they went.

“I’ve always been more interested in making as a design process” he said.

Owen concluded his talk with information on how architecture and design can be used in international development to engage communities in building and designing their own schools and community spaces.

Mehran Gharleghi, founder of studio INTEGRATE wrapped up the day with a talk about his own design inspiration, describing how much you can learn from nature and from working with other subjects and learning other disciplines.

Mehran worked with microbiologists to learn new 3D printing and design techniques they were using.

“I try to educate myself in the business of design as well as the intricacies of making” says Mehran, “now I find myself designing only about 10% of the time”.

The session ended with some questions from students and some crucial advice from the speakers. “Find your interest” said Mark Lim, “worry less about the subject and more about what interests you.” 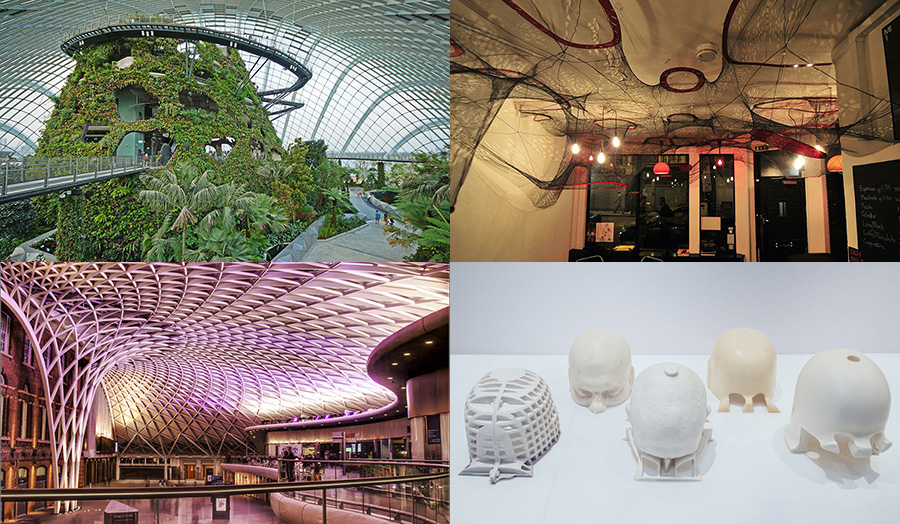