Associate Lecturer, Sara Hannant, will have her work featured in an exhibition in Cardiff.

The work of London Met Photojournalism Associate Lecturer Sara Hannant is being featured in a year-long exhibition at the Welsh National Museum in Cardiff.

Women in Focus explores the role of women in photography, both as producers and subjects of images. The exhibition draws on works from the permanent photographic collections at Amgueddfa Cymru-National Museum Wales, a family of seven museums located throughout Wales.

The exhibition celebrates the role and contribution of women throughout the history of photography, from the first pioneering women photographers in Wales, to emerging contemporary practitioners including Chloe Dewe Mathews, Bieke Depoorter and Clementine Schneidermann.

It also explores the way in which women have been represented as subjects in photography, from intimate and playful 19th Century staged family portraits by Robert Thompson Crawshay, through their depiction in the field of war by eminent photographers such Phillip Jones Griffiths, to contemporary portraiture, fashion and journalism.

“I am delighted to have my work feature as part of this exhibition,” Sara commented.

“The work invites us to examine how photography has been used to misrepresent women through objectification and idealisation, an issue that has particular currency in today’s climate.

“The exhibition features a number of recent acquisitions that photographer David Hurn has gifted to the museum, continuing his tradition of swapping prints. My image 'Burning Effigy of David Cameron with Nick Clegg as his puppet, Cliffe Bonfire Society, Lewes, Sussex’ is one of David’s swaps and is now part of the Amgueddfa Cymru collection.”

Her work often depict ancient traditions in a modern context. Previous work of Sara’s include her photography of The Druid Order which has been nominated for a 2019 British Photography Award.

The Women in Focus exhibition will run until Monday 28 January 2019 and is free to attend. Further information can be found on National Museum Cardiff’s website.

Women in Focus has been timed to coincide with the centenary of the Representation of the People’s Act 1918, which enabled some women over the age of 30 the right to vote for the first time. This Act marked a key moment in the fight for universal suffrage. 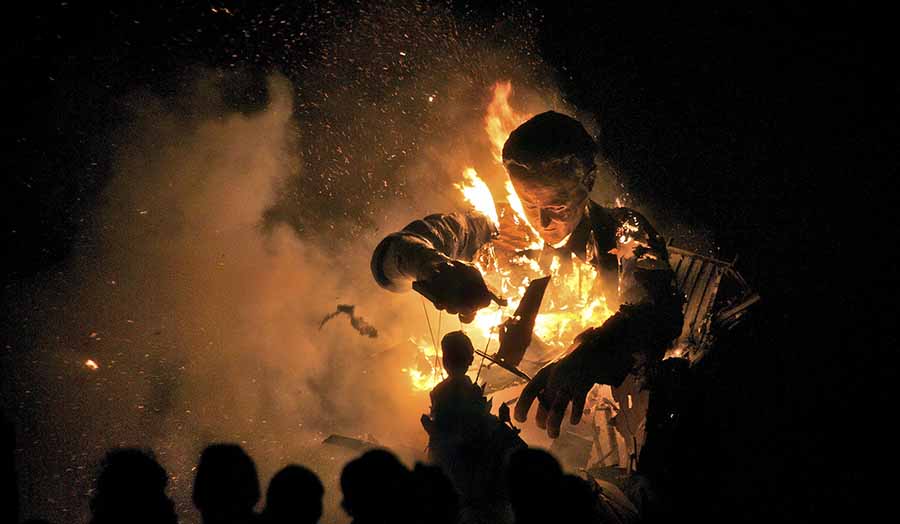