Dr Snorri Rafnsson was invited to speak on a panel about government cuts and the impact it will have on older people.

Dr Rafnsson spoke at the London Older People’s Strategy Group (LOPSG) on the topic of ‘The impact of austerity on health and well-being of older people’ which he based on his recent review of relevant data published over the past 10 years in public health and medical journals, related evidence reviews, and health and social policy reports.

Dr Rafnsson discussed how government budget cuts and welfare reforms have unfolded in the UK over the past 10 years or since they were first introduced in late 2008. Specifically, he spoke about how local government funding and welfare support have been significantly affected by austerity policies, and how this has affected the services provided by local councils, including adult and child social services.

Dr Rafnsson noted that: “Austerity policies and welfare reforms are starting to have a direct and significant impact on people’s health and well-being in this country; evidence is emerging that greater pressures on employment and working conditions, personal incomes, housing and neighbourhood conditions, and standards of living, directly resulting from budget cuts, negatively affect life expectancy, widen health inequalities, and undermine people’s ability to meet necessary material needs and actively participate in society.”

Delivering presentations in venues such as City Hall offers a prime networking opportunity to staff and students at London Met. Dr Rafnsson spoke alongside Frances McAndrew, the Mayor of London’s Strategic Lead for Diversity, Inclusion and Social Integration. In addition to networking, students are also offered the chance to increase their employability, by undertaking a 140 hour placement to support the LOPSG.

Founded in 2000, the LOPSG encompasses individuals and representatives of organisations from the 32 London Boroughs. They are a registered charity, and aim to educate and enable older people to challenge decisions that might affect their well-being. 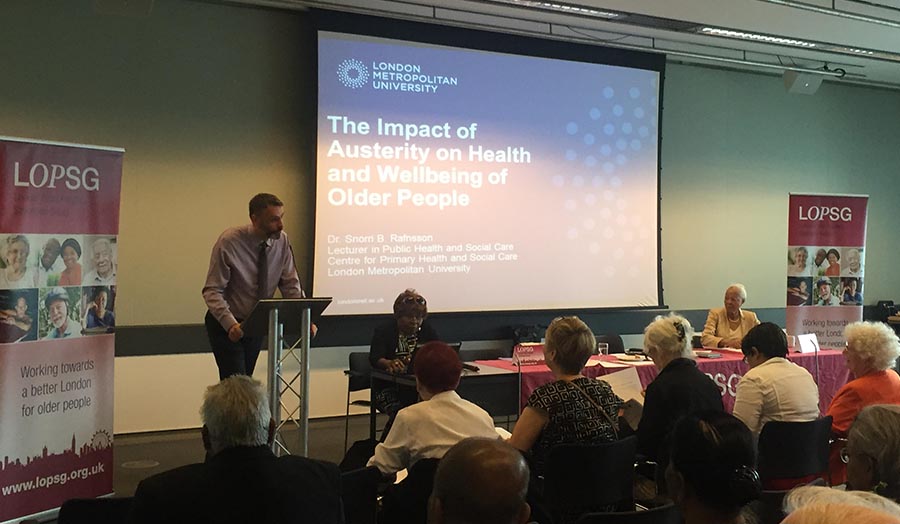