REPORT: Breaking down the barriers to higher education News

A new report highlighting the widening participation and outreach work being enabled by the support London Metropolitan University receives from Sir John Cass’s Foundation, was published today to mark the 300th anniversary of the death of Sir John Cass.

The report, entitled Breaking Down Barriers: Higher Education for All, outlines the specific initiatives that have benefitted from the Foundation’s £2.6 million grant awarded to the University in 2015.

“We are proud to work with our partner the Sir John Cass’s Foundation. Their generous support has enabled us to engage with students in some of London’s most deprived boroughs,” said Professor John Raftery, Vice-Chancellor of London Metropolitan University.

“The grant has been allowed us to significantly expand our outreach activities and provide additional support to initiatives such as the Big Idea challenge, our enterprise competition for young people in London, which this year featured entries from hundreds of students from 25 colleges across the capital.”

London Met is one of the most diverse universities in country; more than 60% of the University’s students are from black and minority ethnic (BME) backgrounds, 98% are state-school educated and more than two-thirds of students are from low-income households.

Many of London Met’s students are the first in their families to go to University and the University provides them with opportunities they may not get elsewhere. The most recent available figures show that over 96.7% of all London Met students are in employment six months are graduation – an increase of 12% from four years ago. Importantly, the number of graduates in highly skilled jobs has increased by over 32% since 2014.

“The Foundation is proud to be one of the University’s largest benefactors, not only through our grant funding and making the Jewry Street building available for no consideration from 1970 to 2015, but also through our ongoing partnerships with joint-ventures such as the Sir John Cass School of Art, Architecture and Design, opened in 2012.”

Sir John Cass’s Foundation is one of London’s oldest and largest education charities. Founded in 1748, it supports education for young people in London through its grant programmes for individuals, schools and organisations, and its support for a number of institutions bearing Sir John Cass’s name.

The Mission of the Foundation is to promote the education of young people in inner London through its grant programmes for individuals, educational institutions and organisations. 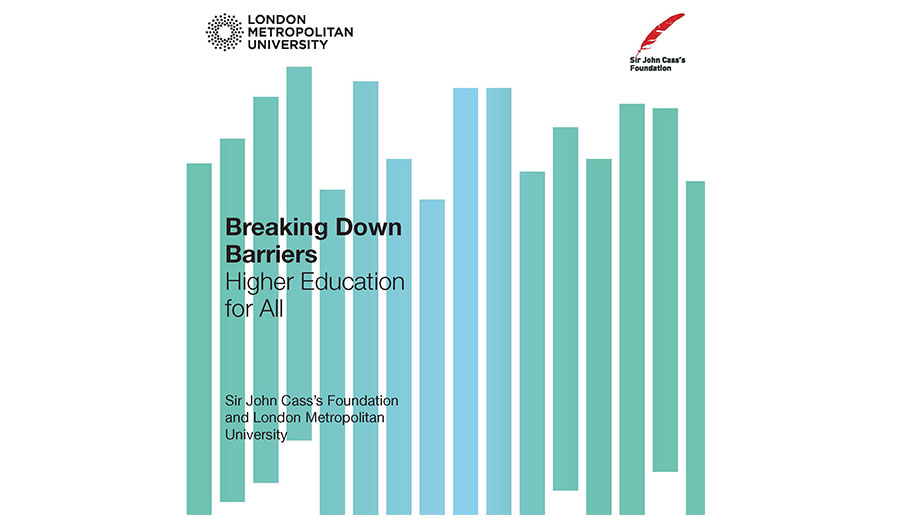 The Breaking Down Barriers report was launched on Tuesday at a reception at Carpenters’ Hall in London to mark the tercentenary of the death of Sir John Cass in 1718.