Staff and students in London Met's Faculty of Art, Architecture and Design - The Cass - are behind a new film challenging the marginalisation of arts subjects in schools.

Art Party, released today in cinemas across the country, aims to promote the creative arts and its role in the UK education system.

Described as ‘part documentary, part road movie and part political fantasy’, the film is the brainchild of artist and London Metropolitan University lecturer Bob and Roberta Smith (Patrick Brill, pictured), who wrote and produced the movie with filmmaker Tim Newton.

It centres on the first ever conference of the non-political group, the Art Party – which stands up for the promotion of art, music, drama, dance and design in schools.

Combining footage from the conference, which saw the country’s leading artists and educators gather in Scarborough last November, with a fictional plot involving the villainous Michael Grove, the film serves as a stinging spoof of former Minister for Education Michael Gove and his policies.

The movie, which received a four star review from Total Film, was created with the help of London Met students who acted as camera operators, editors and designers - providing real world experience for students. Much of the film was put together in the University’s Aldgate-based faculty of art, architecture and design, The Cass.

“It is a call to arms to protect the future of the creative arts in this country - a future which is jeopardised by the current government,” said Bob and Roberta Smith. “We need to put pressure on all politicians to take the arts more seriously. Recent reforms have stifled creativity and downgraded innovation in schools.

“We hope Art Party will inspire a generation of kids to choose arts subjects at GCSE and aspire to explore their inventive, inquisitive nature and be all they can be.”

Michael Upton, Academic Leader at The Cass, said: “We are delighted to have collaborated on the Art Party conference and feature film. Fine Art staff and students participated in the spectacular Scarborough event, and students from our Film and Broadcast Production course worked closely with co-director Tim Newton to gain valuable industry experience.”

Find out more about The Cass. 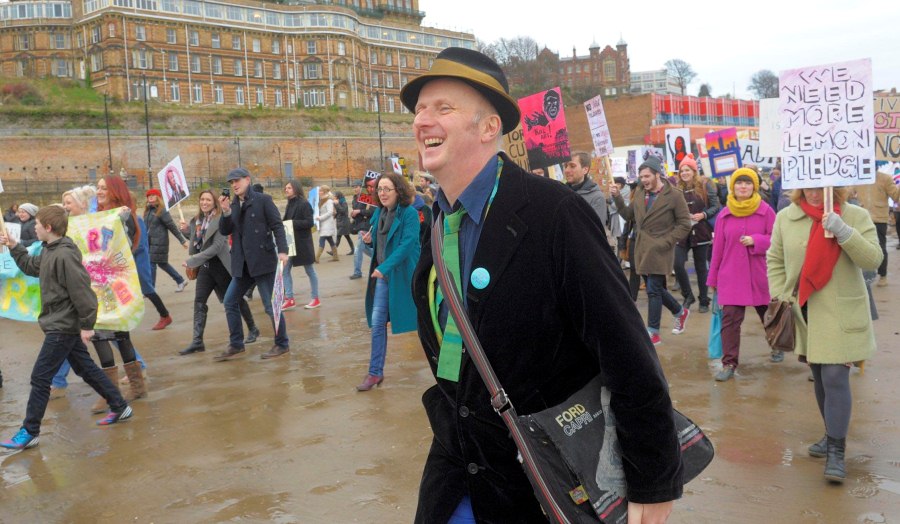